Suzie is your typical preteen girl living in suburbia. Her home life is a little fucked, what with her father having been murdered and all, but one evening she discovers that when she orgasms – she stops time. In an effort to make sense of this new-found “talent” young Suzie goes on quest to determine if this sort of thing happens to everyone…or just to her.

(Spoiler alert: it turns out that not all young girls stop time when climaxing.)

Years pass and Suzie begins to understand her ability. Though every time after a tryst, Suzie finding herself alone, frozen in time, in what she calls “The Quiet”. As one can imagine, after years of sexual activity, this becomes a little lonely. One night, at a house party fundraiser to save her library, she meets Jon. They get to talking, one thing leads to another, birds and bees or whatever…and they each discover that they each have the same unique skill. 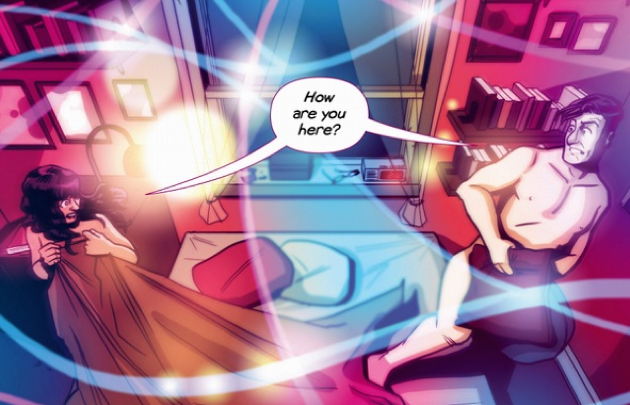 This is premise of Sex Criminals brought to you by Matt Fraction and Chip Zdarsky. What transpires next is an incredible journey exploring mainstream perceptions of sex, love, and villainy.

Fraction and Zdarsky make for the perfect writer/artist pair in Sex Criminals volume 1. Both individuals have a knack for accurately and cleverly depicting the complexities of human emotion and desire. Zdarsky’s art is both beautiful and, at times, uncomfortable – which is something we can say about life in general, eh? Fraction, in turn, fills the page with witty and entertaining dialogue, telling an entirely believable story of two individuals with unique talents meeting, commiserating, and falling in love.

The backstories for each character are brilliantly executed by weaving the past with the present. For each flashback, our protagonist Suzie, breaks the fourth wall to narrate the scene. We get to know Suzie in Chapter 1, before she meets Jon. We in turn learn Jon’s history as he tells it to Suzie during their 55-hour “first date.” Experiencing the story via the character who experienced it give Sex Criminals an appropriately intimate feel.

However, for a graphic novel that is so clever in its wit, it seems unable to escape the silly and nonsensical. For example, for some reason when time has stopped, Jon’s dick glows. It provides a fairly funny introductory moment, there never really seems to be a point to Jon’s glowing dick. It’s briefly mentioned that it provides a means for him to know how much longer time will remain frozen, but it really just comes across as gimmicky. And yes, I realize how silly it seems to harp on this one aspect, when the story as a whole is fairly ridiculous. 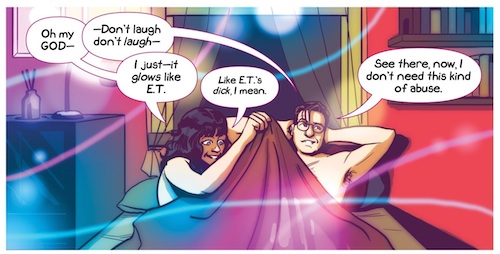 But where’s the conflict, eh?  Well, Suzie and Jon have the bright idea to start robbing banks to help save Suzie’s library from foreclosure. This attracts the attention of the Sex Police, a mysterious body who apparently patrols those with time-stopping sex powers to make sure they don’t attract notice and give away their secret. Again, for all the intelligent wit in the book, they couldn’t have come up with a more clever name?

The verdict: In the end, Sex Criminals Volume 1 provides a unique and entertaining story and realistic portrayal of discovering one’s sexuality. Buy it.