Let’s Talk About the End of Guardians of the Galaxy

By now you’ve hopefully seen Guardians of the Galaxy and maybe read our review of the film.  If not, you must be a spoiler-hound because, jeeze, who the hell would click an article with this title if you hadn’t seen the film already?

Howard the Duck has a speaking cameo at the end of the film.  He looks like this: 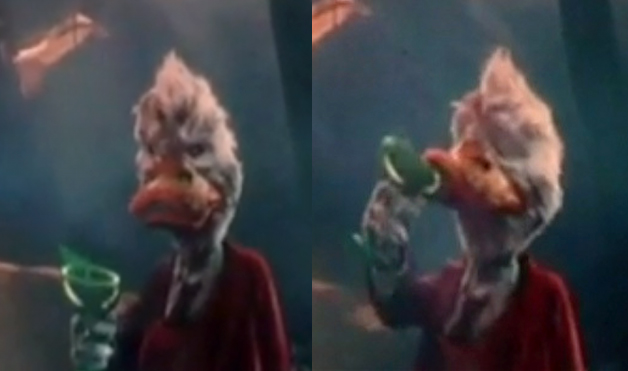 If you’ve been following Nerdy Show for any length of time, you’ll know that I’m a big-time Howard the Duck fan. Here’s a quick run-down: Howard was created as a weird sight gag by Steve Gerber and Val Mayerick in a 1973 issue of Adventure Into Fear. Via a cross-dimensional kerfuffle he ended up in the Nexus of All Realities (aka the Florida Everglades) and briefly hung out with the empathic beast, Man-Thing (who was recently name-dropped in Agents of S.H.I.E.L.D.), before falling into a vortex and ending up in Cleveland. Howard became a cult hit and in 1967 got his own comic. Howard the Duck became the most culturally significant book in mainstream comics.

For the 27 issues he wrote, Steve Gerber deconstructed American culture as well as the of the fallacies of the Marvel Universe and comic book storytelling via a hip-high anthropomorphic duck. The humor was sharp and the story was shockingly human. Howard isn’t a hero – he’s a normal guy “trapped in a world he never made”.  He’s not only an outsider because he’s a talking duck, but because he’s in a world where incredible stuff happens and when you’re a talking duck people have misplaced expectations.  Howard/ Gerber’s down-and-out comedy is sharp and thought provoking. I highly recommend picking up a copy of The Essential Howard the Duck or Howard the Duck MAX.

Hopefully I’m preaching to the choir, but most people know about the George Lucas-produced box office bomb that was 1986’s Howard the Duck.  For the record, even though it’s a horrible bastardization of Gerber’s character, I like the movie.  It’s such incredible, impossible cinematic cheese that it’s good-bad in the same leagues as Super Mario Bros. The Movie and Mortal Kombat.  However, the ultimate result of the film is that now, almost 30 years, later people still scoff at the name Howard the Duck.  To be fair, the film was just the last nail in the coffin. By that time Howard was already damaged goods.  Gerber had been yanked off the book due to Marvel taking issue with his direction. The furter comics that followed all missed the mark on what made the character work and scrambled his backstory. Biggest example: Duckworld – a planet populated by duck people and inexplicable duck puns (ex: Ducktor Strange) and duck titties (see below). Easy laughs playing for the cheap seats. 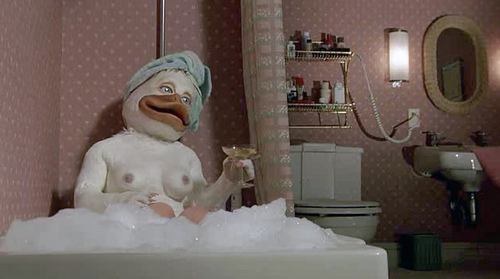 In Gerber’s Howard, he comes from a planet of cartoon animals, a la the Disney-verse – lending credence to our own theory that he’s Huey, Dewey, and Louie’s deadbeat dad. Which leads to another way Howard was boned post-Gerber: Disney threatening legal action. Given present ownership it’s now ironic, but Howard wouldn’t be wearing pants presently if it weren’t for the Big D coming down on him for looking too much like Donald.  And even with his pants-clad appearance in Guardians some people still can’t tell the difference. After Howard got slacks, his further appearances only continued to water down the character until Gerber brought his bite back in a brief 2001 miniseries. (Where he pointedly turned Howard into a mouse for most of the book).

But back to the matter at hand: Guardians of the Galaxy.  Howard is imprisoned along with Cosmo the Cosmonaut dog (future mayor of Knowhere? Fingers crossed!) in The Collector’s menagerie. Apparently you can see him in the background of earlier scenes, but the money shot is after the credits. Cosmo is licking The Collector’s face (really wish he would have spoke) and off-screen a grizzled voice says something to the effect of “why are you letting him lick your face – that’s disgusting.” Cut to Howard drinking a neon green cocktail just like The Collector (nice of him to share). He comments about how the drink burns, and stretches his knobby, webbed toes. Cut to black. “Howard the Duck created by Steve Gerber and Val Mayerick”.

For the record, I’m not a fan of the Howard the Duck movie, but I was an ENORMOUS fan of Steve Gerber’s Howard in the comics as a kid.

First of all, I love that after all the precedent-setting legal battles for creative control the punctuating note of Guardians of the Galaxy is “Howard the Duck created by Steve Gerber and Val Mayerick”. It means little in the grand scheme of things, but any kind of celebration of the irreverence of Howard and his creators is something to cheer for.  The actual scene itself… it’s hard to say.  Certainly not bad, but I want more.  Howard is covered in dirt so it’s hard to get a feel for his cinematic redesign. Nothing about the staging or the dialogue really says anything about his character.  Him calling Cosmo gross and commenting on his drink denotes a surly comedy rather than that of a belligerent cynic. I’m analyzing 30 seconds of film here, so it’s a nitpicker’s game. The short takeaway is this: it was exciting to see Howard on the screen – honestly I never thought it would happen again. I really hope that this isn’t the last we see of Howard stumbling his way through Marvels’ films and TV shows. And finally, the characterization could have been sharper, but maybe I’m over-analyzing. 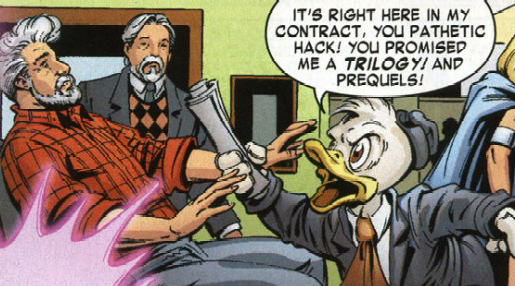 It was revealed on The Nerdist that Howard’s voice is none-other than Robot Chicken‘s Seth Green.  They speculate that voicing Howard was the reported role that Nathan Fillian turned down in favor of someday having a larger role in Marvel movies. Personally, I’m bummed about that.  I’d like to hear more to make a full judgement, but my initial reaction is that Green’s voice is not a good fit.  It’s like a less screechy Gilbert Godfrey, which I feel doesn’t lend itself to the every-day sarcasm that Howard represents.  Howard is a grumpy bird but he’s not freaking Iago. Even if he did something odd with his voice, I think Fillian would’ve likely better conveyed Howard as a character rather than a sight gag.  But in the context of Guardians, and in his many appearances in Marvel over the years, Howard has been largely just that.  My commentary supposes that we could see him again, and I hope we do.  We don’t yet know what kind of a movie 2016’s Doctor Strange is going to be.  Howard and Strange have worked together before, so if there’s room for comedy in the film, an appearance from Howard isn’t out of the question. What’s more, him stumbling around with the street-based characters in Marvel’s upcoming Netflix series or screwing with Coulson on Agents of S.H.I.E.L.D. (especially if Man-Thing is involved) would be amazing.

But hey, I’m just one duck-devoted nerd with some strong opinions.  How did you feel about the Howard scene? Green’s voice? Should Howard have a greater destiny in the Marvel Cinematic U? If so – we’d better let ’em know!

Tagged: guardians of the galaxy howard the duck