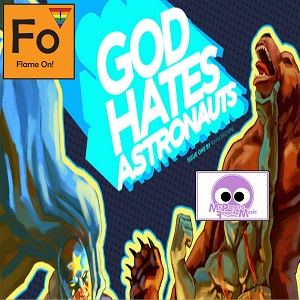 We’ve got a double-stuffed episode of Flame ON! this week with not one but TWO interviews. First up is Ryan Browne, the creator and cartoonist behind the bizarre and hilarious God Hates Astronauts. Bryan sits down with Ryan to discuss his plans for the series, a possible follow-up to his other surreal project Blast Furnace, and his work for comic greats Jonathan Hickman, Charles Soule, and Mike Costa.

In our second interview we speak with the fabulous and talented Steffeny “Steffo” Messinger of nerdcore act My Parent’s Favorite Music, while at the recent Orlando Nerd Fest. We discuss her ascent into the nerdcore scene, her gender fluid identity, and her future plans for musical world domination.