Comic Books… I Read Them – Week of August 6th

Hi!  I’m Nelson, co-host of the EPIC PIEcast! It’s a monthly podcast here on Nerdy Show where Schaffer the Darklord, Charles Stunning, and I get together to talk about nerd stuff and general shenanigans. I don’t “like” comics. I LOVE comics! Every week I’ll devour my comic shop stash and then share my thoughts about them with you. Whether or not we agree every week, we can always be safe in the knowledge that we all love comics.

This is a weird week for DC. It feels like every single issue that is out is being forced to end/wrap up its current story arch to make way this HUGE Futures End crossover event. Some of it works and some of it doesn’t. Let’s get to it!

Action Comics #34 :: HOLY FRAKING CRAP BALLS! This issue is all kinds of awesome. The already tension filled story of DOOMED lands in this issue and it hits the pages running. Very little in the way of exposition but the narrative is fast and action-packed. There are characters all over the place and each with their part to play or sub-plot to fill out but I don’t ever feel lost or overwhelmed. This is massive Superman action at it’s finest. So much crossover. Must read all. BUY IT

Action Comics Annual #3 :: This issue gets it right! This is how a massive Superman crossover story should be told. Tons of characters, nonstop action, huge stakes, impossible odds, and a relentless villain who seemingly can not be stopped. This was an exciting issue – worthy of being an annual. The Batman / Luthor banter is wonderful and the pacing is perfect. BUY IT

Aquaman and the Others #5 :: This book is weird. Not just comic book weird… it’s just weird. I am not sure if I completely like it or not. When “The Others” showed up in the pages of Aquaman, I absolutely loved the idea of Arthur Curry having his own super team. Now that there is a monthly series… Dan Jurgens’ story about enchanted Atlantian gold is somewhat lacking. I’m going to chalk this up to, “be careful what you wish for” BORROW IT

Detective Comics #34 :: In this issue we find ourselves at the conclusion of the ICARUS story arch and I must say, I’m a little disappointed. The issue itself is great – there’s good action and the tension between Bullock and Batman is particularly good. In fact, I really want their relationship to get fleshed out even more. But, the resolution is arrived at too quickly and it seems rushed with an odd and inexplicable twist at the end. BORROW IT

Earth 2 #26 :: Earth 2 has been one of my favorite books to come out of the NEW 52 and I must say that my loyalty has proven itself. This issue is a good solid story with plenty of action throughout. It’s the conclusion the the six part “The Kryptonian” story arch and it wraps up quite nicely. I’m a tad bothered by the cavalier attitude towards two lost heroes at the end (not much of a spoiler) but all in all a very good issue. It’s a wonderful and refreshing treat to see these beloved characters being used in new and exciting ways. BUY IT 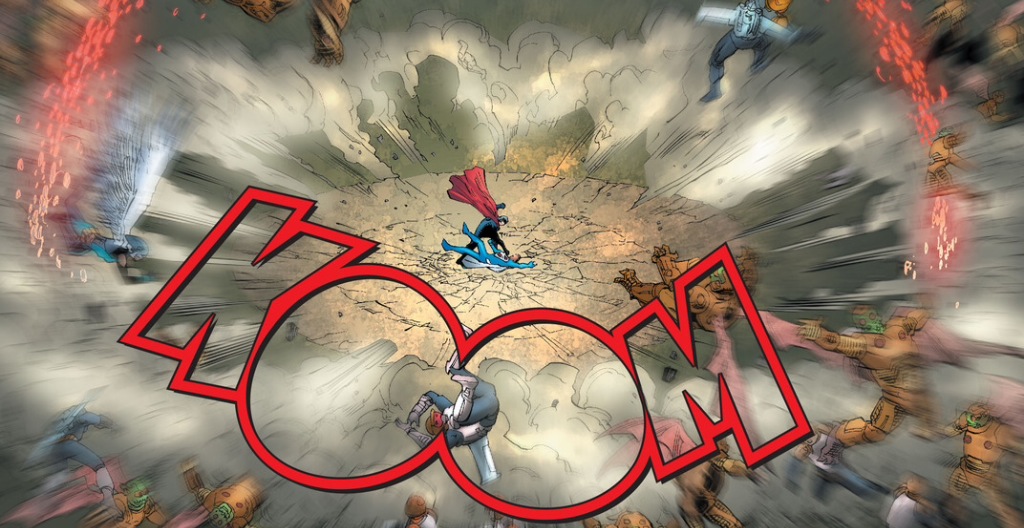 Grayson #2 :: This book confounds me. I want to like this book, I want to love it, I want it to be the breakout hit of the year. But if issues like this keep getting put out I just can’t see that happening. In this issue we get some more information on the bigger mystery and some of the players involved, but all of that is hampered by some incredibly silly choices. Grayson and Batman both refer to the comm line they are talking on as possibly being listened in on… in what Batman universe IS A COMMUNICATION LINE THAT BATMAN IS USING EVER COMPROMISED?!? Then there is a character that we are told is now in a coma but is expected to make a full recovery… A FULL RECOVERY… FROM A COMA?!? Then Grayson, in order to save someone’s life tells the joke of, “make like James Brown… and Get Down” First, that is a horrible joke – second, wouldn’t it just be faster to just say, “Get Down” when… You know… You’re trying to save a life. Am I being way too nitpicky? Probably. But this issue is full of these silly little – eye roll inducing – choices. BORROW IT

Green Arrow #34 :: Ever since Jeff Lemire took over the writing for this book in issue 17, Green Arrow has been on my must read list every month. This book has come a long way and it has only gotten better as a result. This issue wraps up the story that started way back in issue 17 and it is awesome. So much action and so many life lessons for Oliver Queen. The introduction to Diggle into the continuity is a most welcome addition. Normally, I tend to hate when my comics are influenced by television/movie adaptations BUT in this instance, it is a fantastic merger. This book is a must read if only for Andrea Sorrentino’s art. BUY IT

Futures End #14 :: Look, I am no fan of this book. I have made no secret of that. But now, there’s this company-wide crossover with this weekly title. I don’t get it. I REALLY don’t get it. However, I am fully prepared for the possibility that there’s a fundamental part of the Futures End story that I just do not fully grasp. But, I just do not understand why this book is deserving of a crossover on this scale. So far, in the book, a whole lot of nothing has happened… and the story plots that are there are weak at best. Plus, a Hunger Games reference/joke is made – this story takes place in DC’s future – that’s like having a character drop a National Treasure reference. A crossover is not going to make the story better – it’s just going to confuse it further and make it worse. LEAVE IT

Superman/Wonder Woman Annual #1 :: I am loving this DOOMED storyline and it’s multiple crossovers. It’s a thrilling, action packed adventure where everything blows up. What more could you possible want in a Superman story. There’s nail biting suspense and a close call between Wonder Woman and Superman. So much good stuff here. BUY IT

Swamp Thing #34 :: Swamp Thing is so damn good. It’s one of the most consistently good books that that DC has been putting out. This issue wraps up “The Wolf and the Lady” storyline but really it seems like a conclusion to the larger story that’s been happened for the better part of the year. Great action, great narrative and there’s even a bit of a surprise – if somewhat of an odd – twist. BUY IT

The Squidder #2 :: This second installment is of The Squidder fleshes out this world and has won me over. There is something here that is wholly unique and glorious. This world is bleak, and violent, and hopeless – it treats the Cthulhu mythos like a post apocalyptic alien invasion where the human race has already lost. There are monsters, and giant squids, and Dark Fathers but all of that pales in the monsters that humans can become. But, the in two main characters we find that there is the spark of possibility. This book is just getting started and I am hungry for more. BUY IT

Moon Knight #6 :: I love Moon Knight… A LOT! This book… last six issue run has been incredible. Warren Ellis has created something mysterious, engaging, and a whole lot of fun to read. I simply can not sing it’s praises enough. It’s straight-forward storytelling with heart – intense action with a very cinematic feel to it. BUY IT

She-Hulk #7 :: This issue was laugh-out-loud funny to me and it seems whatever growing-pains the book was having has been sorted out and we’re back to some wonderful shenanigans. We get to have a guest appearance by Hank Pym and there’s even some great tension between Hellcat and She-Hulk. The story is ridiculous in a wonderful Honey, I Shrunk The Kids kinda way… AND I am so damn happy to have Javier Pulido back doing the art for this book. BUY IT