Comic Books… I Read Them – Week of August 28th

Aquaman #34 :: This wraps up the Chimera storyline and I must say that this is a great new villain for the Sea King. This issue is pretty much non-stop beat-em-up-action from the first page to the last and yet it still manages to swing around to the turmoil that’s brewing in Atlantis. A really solid issue but Carlos Rodriguez’s art is a bit inconsistent from page to page – it’s certainly not distracting but just enough that I noticed. BUY IT 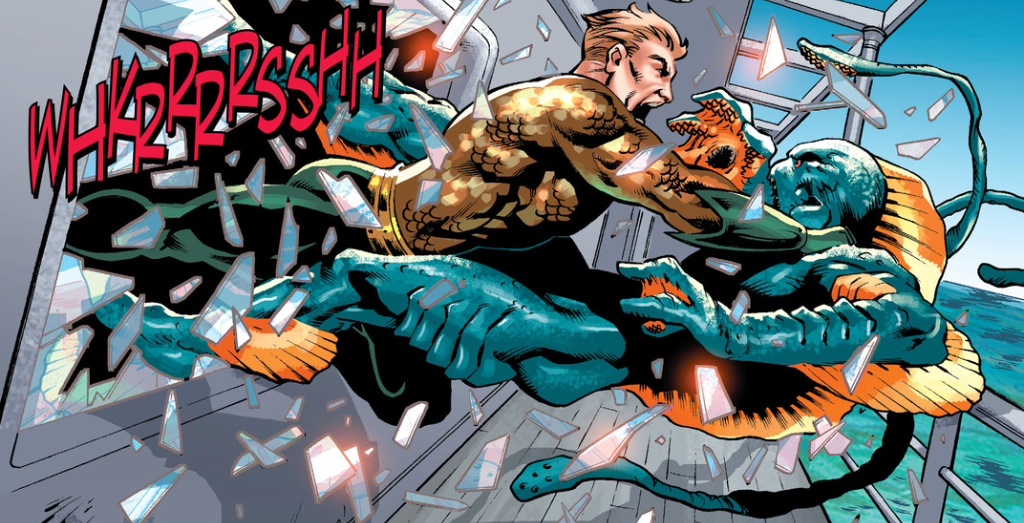 The Flash #34 :: There is a lot going on in this issue. This is the wrap up to the Mashup Gang storyline and we get a wonderful dirty cop story out of the deal. Then there’s more insight into Wally West and his connection to the Reverse Flash. AND THEN there’s more development of Future Flash and his race back through time – which ties back to Present Flash and his deep concern with the faltering Speed Force. Like I said, there is a lot going on but the pacing is great and the action is clear. All in all, a very solid issue. BUY IT

Justice League Dark #34 :: This wraps us the Deadman backstory arch and it is lovely. We get to learn about the early life of Boston Brand and his connection to Nanda Parbat. The rest of the JLD is just trying to keep up and get very annoyed at Constantine – with some pretty funny results. BUY IT

Superman #34 :: “The Men of Tomorrow” story is great and it’s only getting better. I think I’m becoming a true blue Superman fan. This issue is touching and heartwarming – Ulysses is becoming a perfect counter point to Supes. My only concern is that maybe the reader (i.e. ME) is being set up for a hard fall – the parallels and growing friendship between these two is too good. The creative duo of Geoff Johns and John Romita Jr. is fantastic. BUY IT

Injustice: Gods Among Us: Year Two :: I have to admit – I’ve been reading the Injustice comic book – and haven’t said anything about it yet. ‘Cause, I know what it is… I know it’s a video game tie in… and I know that traditionally those aren’t very good. BUT… This comic is not just good… this series is GREAT! I mean really great. Like, I can’t believe how great it is actually. It’s much better than it has any right to be. “Year One” was a well written / superbly drawn story filled with tension that is action packed… and “Year Two” takes all of that and ups the stakes multiple times. The up side is that it’s a digital weekly – the down side is that each book is half the size of a regular print issue – but then the other upside is that it’s only 99 cents. I can not recommend this book highly enough. Go back and read the first 12 issues and then start reading “Year Two”. BUY IT

Black Science #8 :: This series has had some crazy cliffhangers but what I truly love about this series are the intense action packed openings. Every issue so far has started with dropping me into the middle of the action and it has never pulled any punches. In this issue however, we get some much needed exposition and backstory about the Eververse and even some info on the pillar. There are great moments of wonderful character development from the lost kids to the saboteur looking for redemption. I love this book… a lot! If you have not been reading this – stop what you are doing and go give them your money. You’ll thank me. BUY IT

C.O.W.L. #4 :: This issue has a lot going on in it: there’s not one, but two, internal coverups being handled by the top brass, an organized crime take down, a corrupt hero, and the heroes are all on strike. All of this is set against a backdrop to a 1962 Chicago. This series overall is a much slower paced book than I am used to reading. Even the action scenes seem to have a a measured approach. This is a story that is far more nuanced than I’m used to and I really like it. This is a complicated world filled with very human and very flawed people. BUY IT

Saga #22 :: I’m running out of praise-worthy adjectives to heap upon this series. I love Saga and my love is returned ten fold in every issue and this latest one is no different. Amazing work once again – from the hilarious opening image to the last panel cliffhanger. If you are already reading Saga then good for you. If you are not reading Saga then there’s something wrong with you. Seriously, it’s like you just hate fun and good things. Go. Get this. Just go get this. BUY IT

Wayward #1 :: This book seems fun! Here you’ll find mystery powers, invisible cats and a kick ass girl with fangs who loves strawberry milk – but It’s hard tell what’s really going on. There’s a lot exposition here… A LOT. The action is very brief and I’m left with more questions than answers but not really in a good way… BUT it’s not bad either. I can see it’s potential but this issue’s story was over just as it got going. The art is fantastic and the story is most certainly intriguing so I’ll definitely be picking up the second issue next month. BUY IT 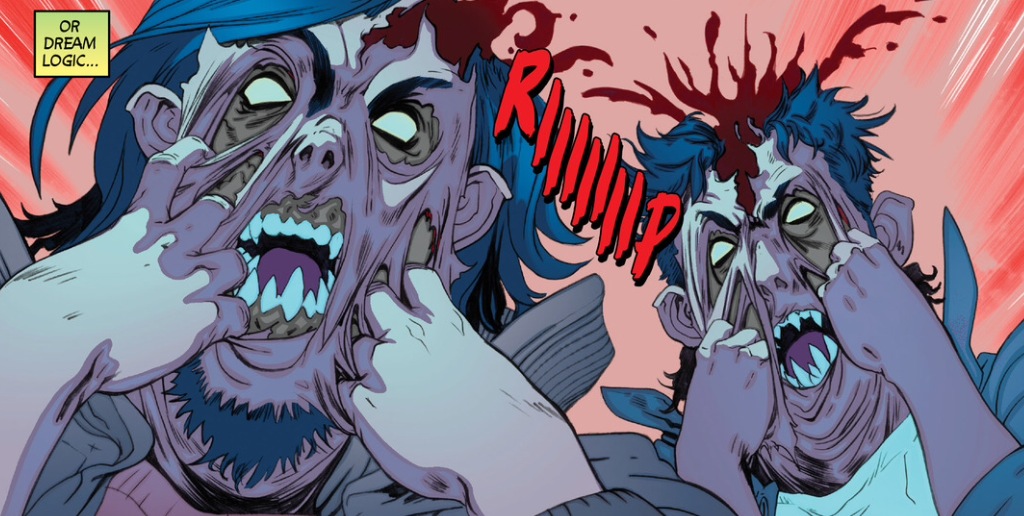 Star Trek: Harlan Ellison’s City on the Edge of Forever #3 :: Yes, I am a total geek/nerd/dork for Star Trek… and yes, I probably would be reading this even if it was terrible… BUT, it’s not terrible – in fact – it’s wonderful! This is a great issue in a great series. David and Scott Tipton have interpreted Harlan Ellison’s work for the illustrated page masterfully. The painterly art by Juan Ortiz and J.K. Woodward is not only beautiful but captures the likenesses of Kirk and Spock perfectly. Like I said last month, this is a must BUY IT for all fans of Trek. If you’re not a fan, then still BUY IT you will not be disappointed.

Guardians of the Galaxy #18 :: Whoa! I mean… Just… Whoa! This issue is great! Start to finish a solid issue with fantastic action and a tension filled story. In this issue we finally find out what really happened in the cancerverse – it’s touching, it’s thrilling and it’s hilarious. Peter Quill and Nova make a wonderful buddy cop team. The cliffhanger left me wanting more in the very best of ways. BUY IT 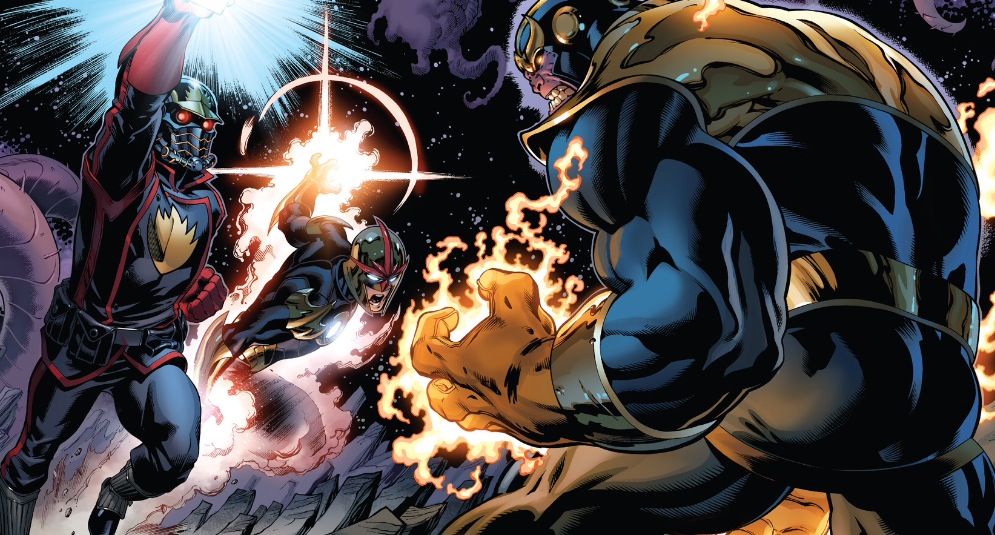