Comic Books… I Read Them – Week of August 14th

This week – it’s official: I hate DC’s Futures End story. Hate it! THERE, I SAID IT! I hate it because it’s (1) a pretty horrible story but mostly because (2) it’s forcing so many DC books to rapidly resolve story arches that could use just one more issue to tie up loose ends. Any problem that I have with a DC book this week is directly because they’re all wrapping up story lines as quickly as possible for this major crossover event. I love DC Comics – but sometimes they make it really hard for me to love them.

Rant over. Let’s get to it!

Hexed #1 :: HOLY CRAP THIS IS GOOD! In full disclosure I just might be a sucker for super hot, magic wielding, art thieves who can kick ass and protect the innocent. Also, her name just happens to be Lucifer (no relation to Satan… at least that I know of). This is the first issue of Hexed as an ongoing (it was a limited series in 2011) and it’s my first issue ever – I’m already hooked. Great story, great action, and the introduction of not one… But two villains. BUY IT

Dark Ages #1 :: Okay. I can totally tell right now that this book is going to be a whole lot of fun. It’s old world knights with swords and chain-mail armor versus monster bugs from outer space. What’s not to love here? Dan Abnett’s story is just great and I. N. J. Culbard’s minimalist art style is very good here. BUY IT 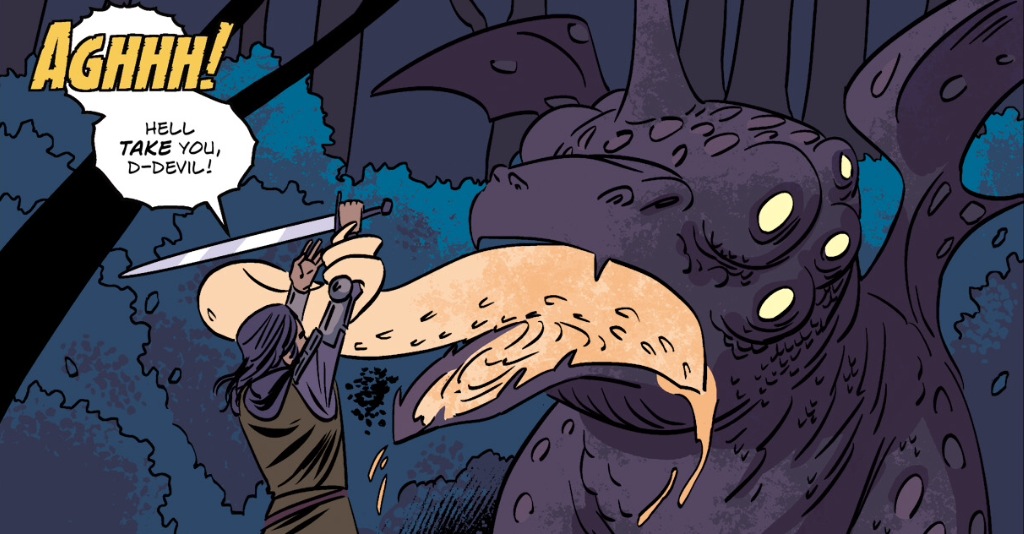 Batgirl #34 :: This issue is great! It’s the conclusion of the Knightfall villain story arch and it wraps up nicely. It’s not as action packed as you might expect with an issue that pits an army of mercs and super villains against… well… almost every female hero in the current DC continuity. But there’s enough satisfying story here to have a lovely – if somewhat rushed – resolution. BUT IT

Batman #34 :: Coming off the Zero Year story line I was a little concerned about what would be next. My fears were completely misplaced. This issue is wonderful. It’s a great stand alone story about the crimes that fall under the Batman’s super-villain radar by Scott Snyder & Gerry Duggan. The art is quite good here and I want to see more of Matteo Scalera’s art. BUY IT

Birds of Prey #34 :: This issue is… disappointing. It wants to be a resolution/wrap up for the Suicide Squad story arch, but it’s quite lacking. I generally love Christy Marx’s writing on this book but this one feels just flat. Also, Robson Rosha’s art here is not great either. LEAVE IT 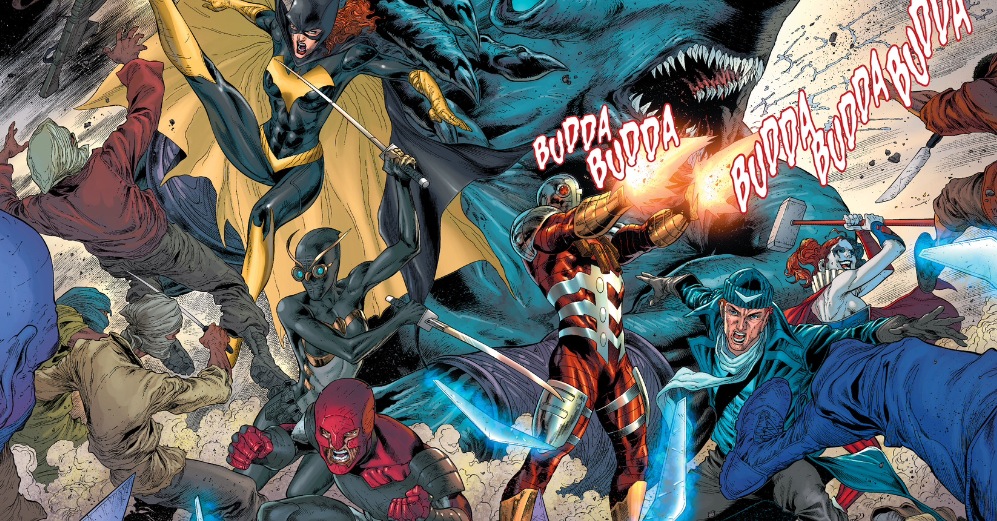 Constantine #17 :: Here, we find my favorite chain-smoking, magic-wielding Brit, out-of-time and out-of-place… Literally! This a pretty solid issue that picks up the shenanigans he has going on with The Cold Flame and we even get to see a wonderful cameo from very young Dr. Occult. BUT IT

Justice League United #4 :: I feel like a broken record saying this… This is a wrap-up issue. Lots of exposition, some really good character moments, the formation of the official team, and basically a lot of tying up loose ends. There’s a crisis moment that Adman Strange has that just gets unceremoniously trucked over, but a solid issue nonetheless. BUY IT

Futures End #15 :: Do you know what the definition of insanity is? Doing the same thing over and over again expecting a different result. That’s kinda how I feel about Futures End. There are four guys writing it – it’s no wonder the whole thing feels disjointed and convoluted. LEAVE IT

New Suicide Squad #2 :: This is pretty good. Nice action, a well paced story, it doesn’t get bogged down with exposition – overall a very solid issue. And yet… Something feels off. Not bad – just off. Maybe it’s the fact that I can’t get behind this incarnation of Harley, or the fact that I could care less about The Joker’s Daughter, or the fact that Black Manta is way too good a villain to be used this way. BORROW IT

Sensation Comics Featuring Wonder Woman #1 :: THIS IS FANTASTIC! It’s a part of the Digital First series and it asks the question – what if the entire Bat-Family died and a chair-bound Barbara Gordon called in Wonder Woman to protect Gotham. If you’ve ever wanted to see Wonder Woman punch Mr. Freeze in the face… Then This Is The Book For You! BUY IT

Superman/Wonder Woman #11 :: This is an action-packed issued filled will tension and even a genuine chuckle or two. There’s a funny moment between Mogul and Non – intermixed with a suspenseful moment between a barely alive Cyborg, Lana, and Steel. The art by Tony Daniel and Thony Silas is stellar. BUY IT

Sex Criminals #7 :: I love this book. I simply love this book. The entire series is filled with real human fears and desires. The characters are at once completely relatable and over-the-top. It is by far one of the most intelligently written comics available right now. This issue is just fantastic. Once again, we get a very human story told in heart-tugging and hilarious style. BUY IT

Starlight #5 :: Duke McQueen is a fucking badass and I love this issue. The rebel uprising is about to start and that is when all hell breaks loose. Great back story about Space Kid’s parents and the double cross that was revealed last issue comes crashing down in this issue. BUY IT

Astro City #14 :: I am an unapologetic Astro City junkie. I can not get enough from this wonderful series. Human stories in a world packed with the weird and the fantastic – and this newest issue is no exception. A tale of killer robots and the lovely old lady who cares for them. The story is pitch perfect – as always – and the art is wonderful – as always. BUY IT 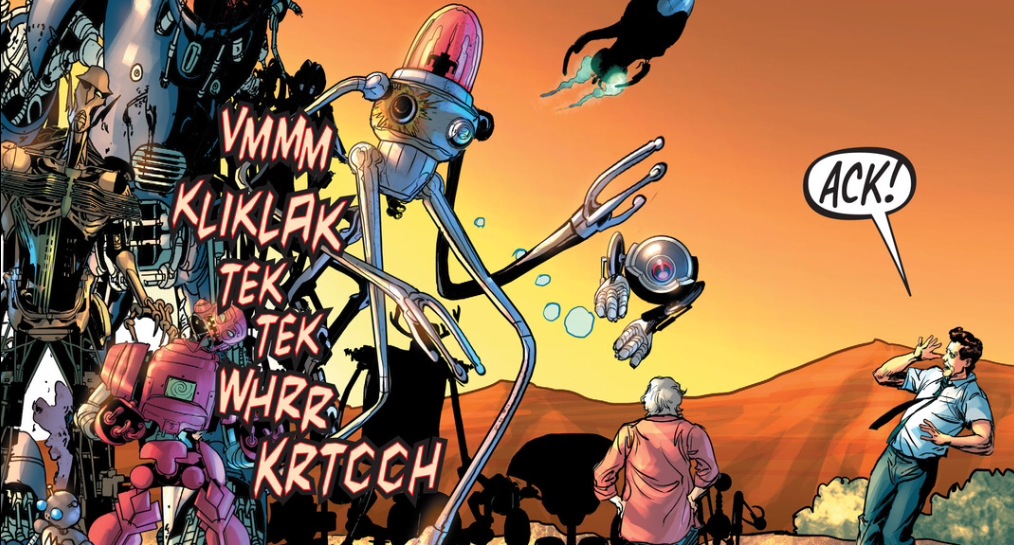