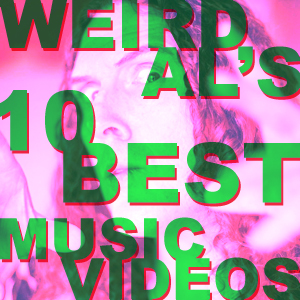 Last week, “Weird Al” Yankovic not only released his 14th album, Mandatory Fun, but began a campaign of releasing eight videos in eight days. The last video, “Mission Statement“, was just released today. Al’s career began in the heyday of classic MTV, creating a symbiosis between the wordplay of his albums with the sight gags of his videos. In honor of his latest  video campaign, we’ve managed to narrow down and rank Weird Al’s 10 Best Music Videos.

It was hard enough to pick a favorite video, and harder still to figure out how they ranked.  This list represents the videos that made us laugh the hardest and hit a pinnacle of quality and creativity that dwarfs all Al’s 49 other videos.

As an added treat for this momentous occasion, we’ve also dusted off a homemade Weird Al video for the song “Germs” filmed by Nerdy Show hosts Cap and Colin in middle school. Does it measure up? Not even close! So set your sights low with ours and then get ’em cranked up real high – because below you’ll find the pinnacle of comedy music video.

Al took on the dawn of the internet era and the dot-com boom with “It’s All About the Pentiums”, a parody of the Puff Daddy rap “It’s All About the Benjamins”.  The song and video are a precursor to his Office Space-driven comedy of “White and Nerdy” and even the just-released “Mission Statement”.  “Pentiums” mashes up late 90s hip hop aesthetics and directly parodies P-Diddy’s  “It’s All About the Benjamins” and Notoriouis B.I.G.’s “Mo Money Mo Problems” videos. Along with guest appearances by Drew Carey, Emo Philips, and a 1958 Nash Metropolitan, Al makes a big splash into the nerd rap game. Not bad for a follow-up to “Amish Paradise”.  – Adam Briggs

“Headline News” is Weird Al’s third directorial outing and after going into overtime shooting, cost the studio more money than had ever previously been spent on any prior Weird Al music video. It was money well-spent.  “Headline News” parodies Crash Test Dummies’ “Mmm Mmm Mmm Mmm” and takes on a batch of sensational (and still legendary) early 90s sensationalist headlines. The video is a direct parody, and warps the original’s theater framing device and art style into a Weird Al classic. – Colin Peterson


Not only is this a great spoof of Red Hot Chili Peppers’ original video – it’s also less repetitive and more fun. Everything that worked about the original song and video are distilled and perfected so much so, that Al’s “Bedrock Anthem” supersedes both. All of the crazy dancing in the desert that seemed so random before is instantly validated just by being about cartoon cavemen. The Flinstones may have invented “cavepunk,” but Al perfected it.  “Bedrock Anthem” is even more impressive knowing that this was Al’s first full-blown shot at directing (“Christmas At Ground Zero” excepted).  – Doug Banks


A Parody of Robin Thicke’s, “Blurred Lines”, “Word Crimes” uses kinetic typography to transform the formerly rapey song into an educational masterpiece. It’s like Schoolhouse Rock! for adults! Thicke’s over-sized hashtags are back, but put to better use – self-parodying the twitter age’s poor grasp of grammar and English in general. The video is filled with Easter Eggs from Trogdor the Burninator, Doge,  Microsoft’s “Clippy”, and Al’s favorite number: 27.  Call Weird Al a grammar Nazi all you want, he’s right. – Adam Briggs

Pop quiz: It’s the mid-90s and you need to do a music video with dinosaurs, but you don’t have a Spielberg-sized budget to spend on them – what do you do? Answer: hire some animators! For “Jurassic Park”, animators Mark Osborne and Scott Nordlund combined claymation, stop motion, and hand-drawn animation to create one of the best-loved animated music videos of all-time. It’s got all the charm and sight gags of a classic Weird Al video but bigger, badder, and with tons more blood.  Case in point: T-Rex gruesomely decapitating Barney the Dinosaur. A powerful moment in 90s youth culture.  – Cap Blackard


“Eat It” was the first Weird Al video that was in heavy rotation on MTV.  And for good reason.  This shot-for-shot parody of one of the King of Pop’s most iconic and successful music videos, “Beat It”, was bound to shoot Al into the stratosphere. You just can’t beat street thugs duking it out with spoon and fork over a rubber chicken.  You just can’t…  Unless a fat suit is involved.  – Colin Peterson

“Smells Like Nirvana” is a shot-for-shot remake of “Smells Like Teen Spirit”. Because Kurt Cobain was so flattered at catching Weird Al’s notice, Al got full access to the producers of the original, securing him the same set and many of the same actors, including the ubiquitous janitor. The sight gags are everywhere, but my favorite has to be when two girl scouts show up to the grunge show, and a guy runs out of the mosh pit just to smack the cookies out of their hands. The premise is so absurd, it gets me every time.  – Josh LaForge

“Amish Paradise” is amazing, and aside from a couple of sight gags, it isn’t a parody of the video for “Gangsta’s Paradise” at all. Directed by Weird Al, the video has a few really brave moments, such as the the dangerous barn-raising scene, and the section at the end completely performed in reverse . For my money, I’m still just impressed that they found such an appropriately stoic double for Michelle Pfeiffer. – Josh LaForge

Weird Al is a massive Devo fan.  Who else but a true-blue Spudboy could nail the iconic new wave group’s sound and ethos so well that Mark Mothersbaugh essentially declared “Dare to Be Stupid” a perfect Devo song? But it’s not just the tune that makes the song such a successful style parody – it’s the full package. Al, Jay Levey, and Robert K. Weiss created stunning and hilarious tribute to the greatest pioneers of the music video medium. (Just look at this list of Devo references and in-jokes!)  “Dare to Be Stupid” is a video that, much like the song, is more Devo than Devo – and that is a beautiful thing. – Cap Blackard

Take the musical genius of Michael Jackson, the cinematic genius of Martin Scorsese, filter it through Weird Al, and you’ve got “Fat”. This video is a triumph. It’s become as much of an icon for Weird Al as it has for Jackson himself. This whole thing is spot-on. They used the same subway set from the original “Bad” music video, but “Fat” is not too reliant on the source, nor is it too reliant on the sight gags. It’s a perfect blend. However, my personal favorite bit has to be the video’s intro. To me, it’s pure Al. “Yo. Ding dong, man. Ding dong. Ding dong, yo.” You need more proof this is the best video? Watch it on mute. It’s still hilarious.  – Doug Banks