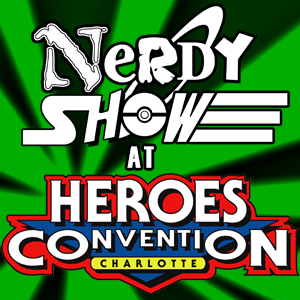 NERDY SHOW IS HEADING TO HEROESCON! This weekend Cap, Aaron, Tony and Trench are joined by Bryan from Flame On! on a trek northward to Charlotte, NC where we’ll be meeting up with long time Nerdy Show Host and Atomic Robo Writer and Co-Creator Brian Clevenger for a weekend of panels, comics and mayhem!

Nerdy Show will be located at Artist Alley Booth #1521.

We’re also moderating some panels over the weekend:

Valiant’s return to the comics industry has been nothing short of breath-taking. Join moderator Aaron Haaland from Nerdy Show as he hangs out with artists Tom Raney, Lewis Larosa, Tom Fowler, Clayton Henry, Brian Reber and Matt Kindt to discuss what’s new in the Valiant -verse.

Cap Blackard from Nerdy Show sits down with the legendary co-creator of the Teenage Mutant Ninja Turtles, Kevin Eastman for a short multi-media presentation followed by a Q and A session!

Terry Moore’s Strangers in Paradise and Gilbert and Jaime Hernandez of Love & Rockets are legends in the world of independent, non-super-hero comics, and both were among the first to bring to life LGBT characters in the comic book industry. Join Terry, Gilbert, and Jaime along with Kate Leth (Kate or Die) and moderator Bryan Pittard of Flame ON! as they discuss all of their ground-breaking work.

You know how comics are supposed to be for everyone? Well Atomic Robo, The World’s Greatest Action Science Comic, actually IS! This wildly successful sci-fi adventure series made a promise: regardless of age or gender – this book is for you. Join Writer and Co-Creator of the multi-Eisner-nominated Robo, Brian Clevenger, and Cap Blackard of Nerdy Show as they discuss how the spirit of inclusiveness informs the creative process, and the future of comics.

Hopefully we’ll see you there!