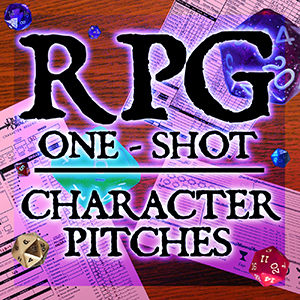 IT’S RPG MONTH! We’re releasing episodes themed around tabletop roleplaying, hosting an RPG podcast panel at MegaCon, and holding a RPG $upport Drive drive where YOU choose the next system we play.  There’s so many awesome systems contending against one another and each RPG 1-Shot represents a totally unique adventure with a unique cast of hosts from the Nerdy Show Network.

For Fiasco, we can’t pitch a character.  Characters are something that have to be made on the spot.  But in lieu of that, Doug (of Nerdy Show and Ghostbusters: Resurrection) has made a case for Fiasco.  Take it away, Doug!

Here’s how “Fiasco” works: Basically, you and your friends sit down and create the most awesome “movie” that no one will ever get to see. The players collaborate on creative control of the story, who the characters are, and relationships, locations, and plot devices are decided by simple dice rolls.  But instead of explaining how to play the game, what I’m gonna do is tell you about the three times I’ve played it, which playsets we used, and how much fun it was.

The first time I played Fiasco, it was with four people who didn’t have any experience with RPGs. They chose the playset called “The Ice.” It takes place in Antarctica, but the rest was up to us. Our “movie” was about a large scientific research base that had a secret drug ring. A low-level chemist was attempting to sneak some drugs onto a small supply plane, but due to some bad calculations, the plane crashed, leaving the pilot stranded in this frozen cesspool until the next shipment arrived. As he slowly tried to solve the mystery of why his plane crashed and unwittingly uncovered the major players in this illegal operation – making himself a target. By the time we reached the climax, many were dead, the station was on fire, and the five main characters were in a Mexican standoff on a frozen runway. Their only way back to civilization: a rickety puddle jumper with just enough room for two, and only one of them knows how to fly.

This game took place in Havana during the 24 hours leading up to the Cuban revolution. Our main characters consisted of a Revolutionist with close ties to Castro, a Communist Sympathizer who fled America after committing several crimes, the American Detective with a personal score to settle who tracked him to Cuba, the Detective’s Father who works for the CIA and wants to intervene, and the undercover CIA operative sent to secretly protect the son and stop the revolution from happening. After many “cloak and dagger” scenes including a police interrogation with a car battery, and front row seats for the live show at the Capri Casino, our finale was a midnight car chase through the streets of Havana as the revolution happened all around us.

This game featured a Bitchy Stewardess and the newly Married Man who she used to bully in high school. The Man and his Wife (a gold digger with a terrible secret) are on a return flight from a disastrous honeymoon in Hawaii. Trapped on a plane with the two women he hates more than anything, Married Man is quickly approached by a Con Artist who is an expert at forgery. He offers to alter the Wife’s passport and marriage license so she’ll be detained and arrested, giving him the chance for an annulment. Low on funds, the only thing the Married Man could offer were the wedding and engagement rings. The only trick was getting it off of his Wife without her noticing, while under the passive aggressive harassment and observation of the Bitchy Stewardess. Although this one wasn’t as “action packed” as the others, it was still just as tense and it kept us laughing for hours.

So there you have it: three examples of the kind of “movie” that Fiasco can offer. Even with the same playset, and same people, it’s never the same game twice. I can also personally guarantee that it’s only slightly more fun to play than it is to listen to.  If you want to share your Fiasco experiences, have a playset you’d like us to use, or just want to talk about Fiasco head over to the forums!