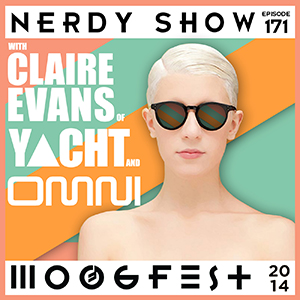 Moogfest is a festival focused around electronic music with symposiums on futurism, art, and technology (April 23rd-27th, in Asheville, NC) and leading up to it, Nerdy Show is speaking with some of the incredible talent that’s been culled for this year’s event. In this episode, Cap and Jon talk with renaissance woman, Claire Evans – performer in the band YACHT, and Editor At-Large of Omni Reboot, the digital reincarnation of the legendary science and science fiction magazine, Omni.

She’s not only performing at Moogfest, she’s putting on a panel called “Xenomusic: Science Fiction and the Synthesized Sound” where artists, musicians, and scientists will muse on what music will sound like in the future and what it might sound like on other worlds.  Join us as we tiptoe the thin line between possible futures and the future present, discuss bringing Omni back from the dead, Philip K. Dick, what’s new with YACHT, growing up with computers, genetically engineering bacteria, and a slew of sciency subjects.