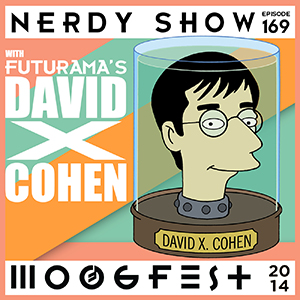 What once was the world’s coolest electronic music festival has expanded to include symposiums on futurism, art, and technology – becoming perhaps the nerdiest event of the year.  Leading up to Moogfest’s launch (April 23rd-27th, in Asheville, NC) Nerdy Show is speaking with some of the incredible talent that’s been culled for this year’s event.

First up is Futurama writer and Executive Producer, David X. Cohen. Cohen and his team brought us one of the greatest and nerdiest shows in animated television – filled with not only some of the finest sci-fi comedy, but some of the most truly mathematical moments in the medium. He’s part of a Moogfest panel called The Math and Science of The Simpsons & Futurama and in this episode we’ll learn about what’s in store as well as hear about behind the scenes tales from the show, learn about his tabletop roleplaying experiences growing up, and more!

We’ve also infused this episode with some long-overdue sci-tech discussion.  Join Cap, Jon, and Tony for the latest tech craziness to come out of SXSW, learn about “the ligers of the culinary world”, and updates on our RPG Support Drive.