If you’ve ever wanted to see your face on a coin, now may be your chance.

Unless you’ve been living with a tinfoil crown atop your head, you’ve probably heard of Bitcoin – the world’s leading virtual currency. It made huge news earlier this week when its value massively dropped after the People’s Republic of China effectively banned it within their country.

But were you aware that there are actually numerous types of virtual currencies, all operating under similar principles? 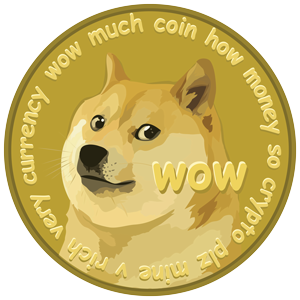 There are even currencies based on internet memes. Take, for example, DogeCoin: an open source cryptocurrency based on the Doge meme. One can only assume it was created as a joke, yet DogeCoin saw an increase in value of over 300% from Wednesday into Thursday. Though worth only a teensy fraction of a Bitcoin (1 DOGE = $0.0012, while 1 BTC = $707.23), this spike in growth only highlights the extreme volatility and ridiculousness of the unregulated virtual currency market.

Perhaps highlighting this absurdity was the intent of DogeCoins’ creators. Or perhaps they just saw a way to make a quick buck. But the whole situation has got me thinking: why not create a virtual currency of my own? 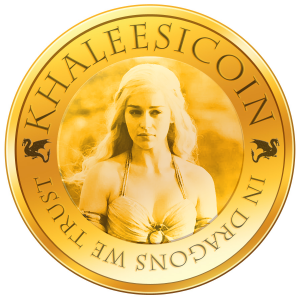 So I give you: Khaleesicoin. The leading currency of Westeros, and favored by Lannisters and Starks alike. Given the extreme popularity of Game of Thrones, I expect this currency to fare quite favorably. Melisandre has seen visions in the flames of extreme spikes in value when new seasons air on HBO and severe drops whenever it is announced that George R.R. Martin is working on a project that is not The Winds of Winter.

Actually, Georgey, I’ll cut you a deal. One million Khaleesicoins for finishing book six by June 2014. It’s a fantastic incentive considering that your progress will significantly affect their value.

Call me crazy, but in these uncertain economic times, I’ll keep my money in accounts that are FDIC insured.

(Author’s note: Khaleesicoin image courtesy of nerdy-frend @the_jenny. We shall make it rain Khaleesicoins for her service. Virtually, of course.)