Episode 159 :: State of the Empire – These Arndt the Droids You’re Looking For 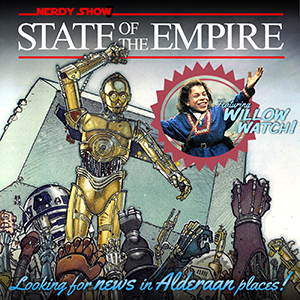 Since last we convened, the Episode VII saga continues to unfold as the balance of power in the universe has once again shifted. Michael Arndt – Episode VII‘s celebrated screenwriter, and our greatest hope for the New Trilogy, is off the project.  We don’t know why, nor do do we know much of the circumstances, but we mourn his loss and attempt to put the pieces together as to how this came to pass and what the future might hold.  With so many last-minute shake ups for this 2015 film, you best believe there’s a lot of drama and strange rumors circulating. Join Cap, Doug, Hex, and Matt as they search for truth in these dark times… and then kick that gloom out the airlock for what becomes one of the funniest State of the Empires yet!

We discuss the latest in Star Wars comics and gaming, drastically different versions of the original films in their infancy, Star Wars: Rebels‘ new villain: The Inquisitor, share our favorite Qui-Gon jokes, and dig deep into eclectic Lucasfilm licensing for a Willow Watch to remember!