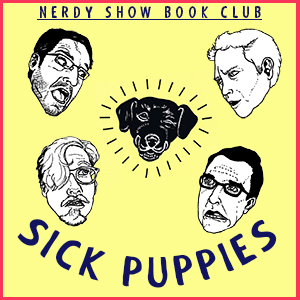 Nerdy Show Book Club returns! We share the books we’re currently reading, discuss the book we read along with you guys, and do some of our famous dramatic readings.  It’s a sexy party in the library, and you’re the guest of honor.

This episode our Community Read-Along is a black comedy set in the Sunshine State, Carl Hiaasen’s Sick Puppy!  Our home state is notorious for all the crazy that goes on here, and Hiaasen’s fictional Florida distills that crazy into a fine drinking liquor suitable for sipping at both South Beach poolsides and in seedy panhandle barrooms – either way, you wake up naked somewhere unexpected.  Join Cap, Colin, Brandon, and Tony as we hit the road with an insane cast of characters including a lovable environmental terrorist, a barbie-fondling ex-drug dealer, a Governor turned avenging-nomad, a hit man with some very special mix tapes… and that only scratches the surface!

We also discuss the amazing response to last month’s RPG $upport Drive and reveal the next Community Read-Along as well as the special guest for next episode.  Let’s just say he had a hand in morphing teen books in the 90s into something awesome.

| Discuss on the Forums