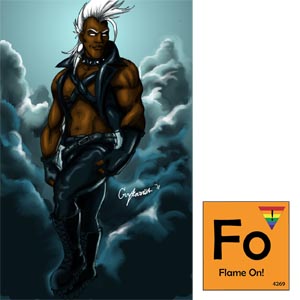 The boys of Flame ON! decided to throw a little party for this recording and brought in a few special guests in-studio, including Jarrod’s friend Carl and Bryan’s friend Matt. In addition to reviews of movies like The Wolverine ad Elysium, the boys even got a little frisky about Russia, who has the better new single, Katie Perry or Lady GaGa, Jarrod and Carl’s tale of geeky gaming at GaymerX, and of course, their picks on the best comic books!

Bryan and Joshua even sat down with the creators behind Captain Ultimate, a new all-ages comic from Monkeybrain Comics. There’s so much fun packed in this latest episode of Flame ON!, you’ll need to run off the excess carbs after you finish it!