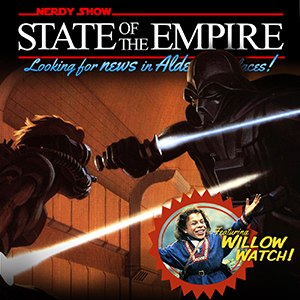 When last Nerdy Show assembled to discuss Star Wars, LucasArts and Star Wars: The Clone Wars had fallen to the might of their new masters and rumors of a television series that would bridge the original and new trilogies had surfaced. It has been three months since Nerdy Show’s last report. We join them now, Cap, Hex, Marc, Matt, and Doug – still looking for news in Alderaan Places…

We discuss the recently-announced Star Wars: Rebels, an animated show set to take place between episodes III and IV with some amazing talent attached, and share new Episode VII rumors including a startling discovery of a possible abandoned version of the Episode VII plot called “Shadows of the Sith”. We also drop a Willow bombshell we’ve been waiting to hear. Casting rumors, details on the new Disney Star Wars attractions, how Carl Urban could become the nerd trifecta, and more!

Stay tuned to the end for the sexiest offer this side of Makeb.