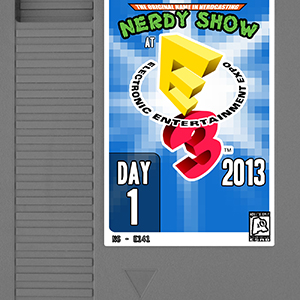 E3 2013 is here! This year, the biggest event in gaming is more intense than ever with two new consoles vying for superiority and shifting paradigms of the industry. Nerdy Show is back in LA covering E3 for Bleeding Cool and this is our take on Day 1.  The show hasn’t started yet, but Monday was a gauntlet of press conferences and media briefings with big reveals from X-Box, Sony, EA, Ubisoft, and all the developers they’re partnered up with.

We share our takes on the new titles, new technology, and controversial decisions that will color the year of gaming and console debuts to come. Stay tuned to all our E3 coverage, including daily podcasts, videos, and interviews all week long.