Episode 137 :: State of the Empire – A Great Disturbance in the Force 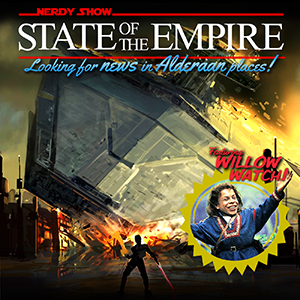 Like a phoenix purging the lands to make way for new growth, Disney, the new rulers of the Star Wars franchise have rained fire down upon the Lucasfilm landscape.  Will it be for better or for worse? Only time will tell.  In this episode we mourn the loss of LucasArts and speculate over what could come of the new Star Wars gaming partnership with EA.  There’s a lot of new developments and hints as to where Star Wars could be heading as the companies get structured and production gets underway. As always, we’ll attempt to put this puzzle together – and if the pieces don’t fit then dammit. we’ll make them fit!

Join Cap, Matt, Doug, and Ghostbusters: Resurrection‘s Nina for more Star Wars insights than you can shake a gaderffii at.  We pick apart the rumored new animated series, Star Wars: Reclamation, that may bridge the gap between Jedi and Episode VII… if it’s not a hoax. We also speculate on new Star Wars developments at Disney parks, and, of course, Willow Watch!