Episode 129 :: State of the Empire – The Deal Alters Further 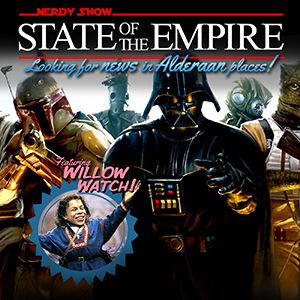 It is a time of great speculation.  Months after the announcement that there would be a new Star Wars film, there is still much that we do not know. That’s why we launched State of the Empire! Nerdy Show leaves no escape pod empty, no wampa un-stomped – we’re looking for news in Alderaan places, and a few of the right ones too.

Star Wars’ new masters are shaking things up in the world of Lucasfilm, and there are some very sizable disturbances in the force.  Does the cancellation of The Clone Wars, the postponement of Star Wars: Detours, and the alleged suspension of development at Lucasarts point to dark tidings, or a much-needed clean up of the various Star Wars enterprises? Join Cap, Hex, Doug, Matt, and Tony as we share our best guesses for what the rumored Star Wars spin-offs might hold, why it should be the “big four“, not the “big three”, and much more.

All this AND Willow Watch! Willow has finally been released on Blu-Ray and Cap recently read the original novelization of the film. Between the newly revealed deleted scenes and Cap’s notes from the novel, we’ve got even more insight into just how big the world of Willow is and the version of the film that could have been.