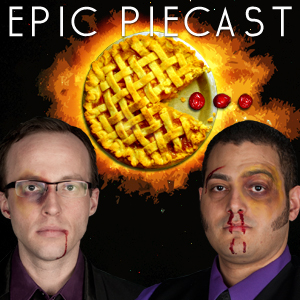 March roars in like a lion and out like seminoma. In this 8th episode of the EPIC PIEcast, the boys talk about hot nurses, drugs and Nelson’s balls, but when Lucas Siegel of Newsarama shows up, talk turns to a spoiler-heavy discussion of all things Batman – specifically the death of a Robin. They chat about the state of DC Comics and even how Warner Bros. is fumbling the comic book movie ball. Will DC Comics implode? How stupid are the Lazarus Pits as a plot device? Will Schaffer become Nelson’s “crusher brownie” dealer? All these questions and more are discussed, debated and ridiculed.

The EPIC PIEcast theme music was created by Dave Famous