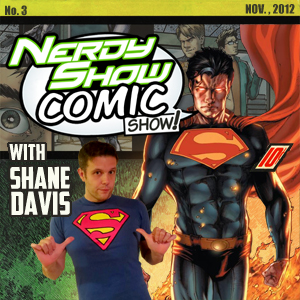 It’s a good season for comics.  A lot of amazing new titles coming out – both indie and big publishers.  Plus the second volume of one of last year’s biggest sellers just dropped: Superman: Earth One. We’ve got Shane Davis the book’s artist in the studio.  He shares some stories about working on the Supe’ book, talks about putting Aaron and Triforce Mike in the book, as well as his other projects.

Join Cap, Aaron, and Adam for discussion on Marvel: NOW, and our favorite recent titles that any fan of awesome things should give a read.