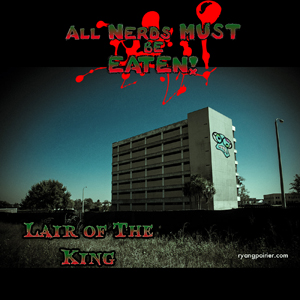 The Nerdageddon continues! All Nerds Must Be Eaten stars a group of Nerdy Show Community members as themselves, featuring some people and places familiar to long-time Nerdy Show listeners.

Things are looking serious. It’s about as serious as Daniel in the lions’ den, in fact. Actually, that’s basically what’s happening right here. Except instead of some Biblical fella, it’s a bunch of nerds. And instead of lions it’s crazy people. And instead of coming out entirely unharmed, we’re all going to die.

The awesome photo used in our album cover was taken by Ryan Poirier. It’s a picture of the actual abandoned building much of this episode is set in.

Posted in: All Nerds Must Be Eaten Featured