The Gazetteers are a group of like-minded nerd girls who are artists, engineers, and writers. This series isn’t about us telling you how awesome or misunderstood girl nerds are. Rather, we just want you to know what gets us excited, angry, or incredibly happy in all aspects of the nerd culture. We’re not about gender-bias; we’re about sharing ourselves, our fan love, our culture, and writing about the nerd world as we see it. We are nerds, we are Gazetteers!

One thing that a lot of gamers love to do is to play online games. It is fun, you can meet new players, challenge yourself against skilled teams, or farm rep and rewards to let everyone on your server know you have are a Roosevelt. One thing that comes with the territory of online gaming is interacting with other players- I mean, that is the real point of it after all. A lot of players are fun, others aren’t. In fact, the world of online gaming is full of trolls. We have all learned to live with them, so it is never a surprise when you see all caps trade chat screaming about how you have the teeniest dick and are a “n00b”. A question we were excited to answer from our forums was regarding some of our personal experiences and other interactions with players on these games. Kristin has been an avid player of MMOs on and off for about 8 years, as a lot of gamers have. So she talks about some of her experiences on how she has been treated in these games over the course of her gaming career. 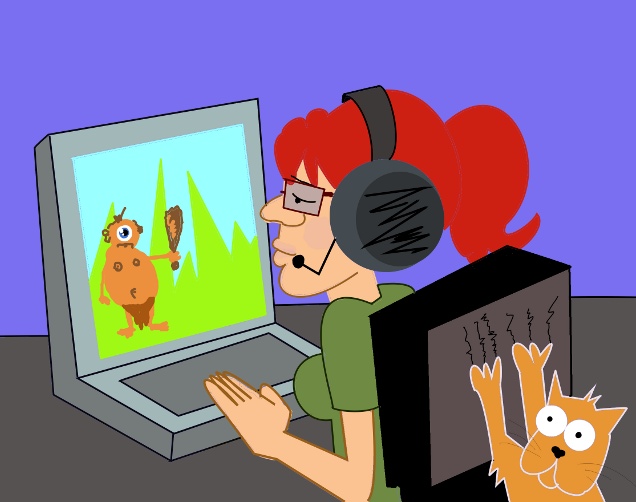 Safe to say if you are a person of any gender, nationality, or sexual orientation, you have experienced some form of crazy online game “bullying” or “harassment”. As a homosapien with my genitals on the inside, I can safely say I have experienced both sides of the spectrum. People have called me a “newb”, told me to stop playing and make a sandwich, and also showed me a tremendous amount of generosity and kindness, which I doubt they would have done if I were a guy. Treatment like this is normal, it is life, it is the internet.

Let me start off by giving you my online gaming resume. I played World of Warcraft (a lot), and Eve Online. That there is pretty much it. I mean I also dabbled in Warhammer Online, and random games on Xbox live and such, but really those two games were it for me. I should also say I wasn’t the strongest player in either game. Even though I was in one of the top rated guilds in WoW on my tiny server and had some of the best gear in the entire game at the time, I was a crap player. Most players on my server hated me for it (and with good reason). But I am not here to talk about my horrible healing abilities, oh no, I am here to tell you about my experiences with online gaming and the stereotypical treatment I was subject to.

I am a farmer, it is true. I loved to farm all the needless rep to get awesome mounts, cool pets, and worthless glamor gear. I would spend hours, and by hours I mean 6-10 hours a day playing WoW, mostly farming for stupid junk. I would mine, jewelcraft, and do anything to kill time if people were in the area I needed to farm. It became really bad when Burning Crusade came out. I wanted my epic flying ability/mount so terribly. At the time it was 5000 gold, and that was a  lot! So while I was mining to raise money, this random player came up and asked if I was a jewelcrafter. I crafted a few gems, but he noticed I was a healer and asked if I could heal a quick instance to help his buddy get a rare drop; I said yes. They needed me on Ventrilo (the voice chat service) for some crazy reason and I was always hesitant to. Not because I am a girl, but because I loved to listen to loud obnoxious music when I gamed, and on Vent I couldn’t. So I begrudgingly got on vent and they were all like “hey dude”, “thanks bro” and in my girly squeaky voice I say no problem. That is when the mood changed.

Let me say these guys were super nice, but they were farming this instance for a specific random drop, a drop I didn’t know I wanted until I saw it (I didn’t know about it). So we run through it like 3-5 times (over the course of 6 hours, none of us had lives) and finally it drops. We are all congratulating the shaman (it was an elemental item). Then I happened to  squeak something about how I didn’t know it was a drop from here and I hoped one day I’d get it, then BOOM it was in my inventory. The guy who wanted it who was team leader gave it to me. This epic bind on equip item that I wasn’t specced for, that we had spent HOURS trying to get for him, and they just gave it to me. I never asked for it, didn’t ask them to help me farm it, heck I didn’t need it (I was a healing Shaman). So for them to just give it to a random player they just met was odd. Especially when it was the item we were working so hard to get for the other guy. I doubt they would have done it if I were a man.

Things like this happened all the time. My epic mount was paid for by one of the same players. He offered to lend me the gold and I accepted. Then when I tried to pay him back, he refused. This guy had spent weeks farming the gold to give it to me, which I only found out after the fact. Had I known I would have refused the loan. Occurrences like this in WoW were common  for girls on my server. Many of us didn’t’ like it, we felt that we weren’t being considered as serious players and were more online trophy wives. It was like we couldn’t do it on our own and needed help from the male players; When in actuality it was the opposite. After while my farming helped level up a lot of my player/friends crafting skills, got them needed gear and helped support them when they needed to stock up on potions and materials for raids.

I think it all stems from some people not completely knowing how to handle “women” on the internet. Places like Reddit, Something Awful, and 4Chan are amazing mystical places. I can safely say that a majority of the people either: A- don’t care about if you are a male, or female. They just care about your cred. And/or B- don’t care if you are male or female, they just like to troll for the lolz. But, in some cases there are instances where people just don’t know how to talk to women who frequent online games or popular internet forums. However, the answer is to just talk to us like anyone else. Yes, there are girls who are shameless attention/cam whores, but a majority of us aren’t. We just want to talk, learn, and share pretty much the same stuff the guys do.

So when it comes to online games and how women are treated you can hear it from every side. Yes, some girls are harassed, but others aren’t. I have rarely had any negative encounters with other online players, unless it was caused by my poor decisions or inability to smash my hot-keys fast enough in raids. Yet that doesn’t mean that they don’t happen, and it also doesn’t mean it’s okay. We all play to have fun, escape our lives, or other not so obvious reasons. Truth of the matter is rather than worrying about how to treat certain people in online games, you should just relax and have fun!