All Nerds Must Be Eaten :: Episode 2 :: Riots and Revelations

Posted by NerdyShow on September 7, 2012 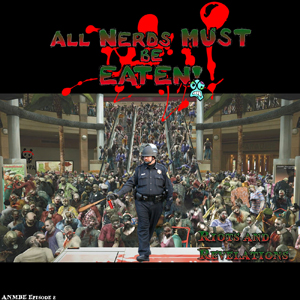 The Nerdageddon continues!  All Nerds Must Be Eaten stars a group of Nerdy Show Community members as themselves, featuring some people and places familiar to long-time Nerdy Show listeners.

As news of the zombie outbreak gets worse and the police start quarantining Orlando, the gang are going to have to find somewhere safer than the Nerdy Show house. Supplies are running low; but with the public getting tense, restocking important items might not be as easy as they thought.

* Running from Evil Horde was credited to the wrong remixer during recording, we are sorry for the mixup.

Posted in: All Nerds Must Be Eaten Featured