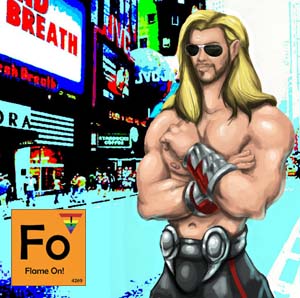 The boys are BACK and ready to avenge all those haters that didn’t enjoy The Avengers. Er, wait a tick, there were people that didn’t like it? Hmm, listen and find out!

While The Question was out being judged by the gods of old, Bryan, Eric, Oral, and Jarrod worked through their issues with The Wrath of the Titans and Cabin in the Woods.

Do you enjoy watching Tyrion slap Joffrey over and over and over? We do too! Oral and Bryan compare notes on Game of Thrones and GCB, while Eric opines for the days of yore with his Once Upon a Time fix. Plus, find out the shocking conclusion to the latest season of RuPaul’s Drag Race (well, at least before the reunion show).

Its the end of an era as Rick Santorum leaves the stage, allowing us to start sharpening up our Mitt Romney jokes for the campaign season. Also, what exactly did Pat Robertson say about bullying gays? Its not what you might expect.

Bryan has a confession about Star Wars: The Old Republic, and it has everything to do with…role-playing? You have to listen to believe it!

Brett White, writer from CBR and sketch comedian, finds the Question and joins the gang to discuss about a month and a half of comics including the hot indie books Saga, Mind the Gap, and the Manhattan Projects among others. Plus, the latest on AvX, the exciting (and not-so exciting) crossovers and seconds waves at DC, and why nobody cares about poor Moon Knight.

We’re long, we’re strong, and we’re sure to get the friction on, so take your time and enjoy some of Earth’s Draggiest Heroes.