Flame On :: Crossplaying with the Gay Comic Geek 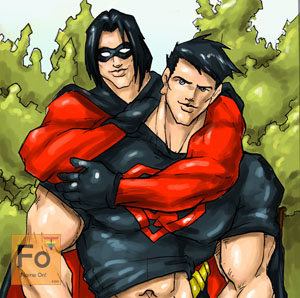 The Gay Comic Geek is here! That’s right, Paul – the nerdiest, geekiest, muscliest guy on YouTube – guest starred on our biggest episode yet! He joined Bryan the Barely Bear, Jarrod the Alterna-Guy, Eric the Muscle Pig, Oral the Catty Sick Black Friend, and The Question of Questionable Sexual Practices as they discussed movies, games, comics, and NERD FITNESS?!!? If you’re a nerd who wants to pwn n00bz but also look great, or if you just want to hear what we thought about Star Wars in 3D, then turn us on, strap it on, and get ready to FLAME ON!

The entire Flame On! crew met up at Orlando MegaCon and had a blast! They caught Before Watchmen: Silk Spectre artist Amanda Conner during the con, but the best times were had afterward. They shared drinks with DC pros and scared away a Star Trek character, but you’ll have to listen to see if they reveal how they pulled that off. Paul went and had a total of six different costumes! He shares some of his stories, but The Question doubts he was sober the entire time…

Chronicle is the first found-footage super hero movie and the boys weigh in on what they thought about the movie and the quirky writer Max Landis. We also revisit Tintin (briefly) before giving reviews of Underworld: Awakening and Star Wars: The Phantom Menace 3D. Also, hear their reactions to the new Amazing Spider-Man and The Avengers trailers! This year is gonna be even more super hero-y than last year!

Eric and Q discover the wonder of the Uncharted series and think about boinking Drake. At the other end of the galaxy, Bryan and Q are still going at it hard with their light sabers in Star Wars: The Old Republic.

When you think football, you think Madonna, right? Didn’t think so. But the boys weigh in on her Super Bowl halftime performance and discuss whether the Queen of Pop ought to let someone else take over.

There’s also talk about the electrifying new show Justified, which surprisingly doesn’t deal with fonts or style sheets. Paul and Oral make a love connection over Naruto, while Paul shares the rest of his favorites including Big Bang Theory and Archer!

Prop 8 is overturned (again)! Plus some other states allow homos to marry! But Eric is already married, Bryan prefers to hibernate in sin, and Oral and Q are destined to be single forever, so while the news is great, they ultimately are just bitter about it.

Bryan attended a concert and sipped on some honeyed whiskey while rocking out to Jonathan Coulton and headliners They Might Be Giants. Oral laments the loss of his own…personal…diva Whitney Houston. The Question mentions a favorite indie band of his called Fun has finally punched through to the Top 40 thanks to their hit single “We Are Young” being featured on Glee!

Paul’s strength is off the charts, and we’re not just talking about that +7 Str modifier on his D&D character. He’s super fit but also loves Superboy as much as the rest of us. He talks about his daily routine, workout diet, and offers some helpful advice to those who want abs as much as they want their own light saber. And, of course, the boys grill Paul on whether he has sex in costume!

It was a huge month for indie comics: Archie, Locke and Key, Jim Henson’s Tale of Sand, Saga, Fatale, Thief of Thieves, Aphrodisiac, Prophet, and Phonogram all get some attention!

Marvel gets some negative attention with the Ghost Rider Creator Scandal, but their books aren’t so bad with FF, Fantastic Four, the Ultimate Comics titles, and X-Men being as top notch as ever.

For DC, Paul schools Q on the Teen Titans and tells us his thoughts on the New 52! The boys also pick apart DC’s new logo, discuss Animal Man’s trippy issue #6, dish on the Green Lantern titles, and more!

This was the biggest Flame On! show yet, but Paul was a hero for taking it like a (super) man and lending his nerdy expertise throughout. Be sure to check out his YouTube Channel as The Gay Comic Geek, his AGayCollab YouTube videos, and his personal website featuring more fan art of him in compromising positions than you can shake a sonic screwdriver at!

Leave us a voicemail at (347) GEEKGAY, or just click on the widget below. Ask us a question about dating, relationships, comics, or whatever you like. We just might use it on our next show!