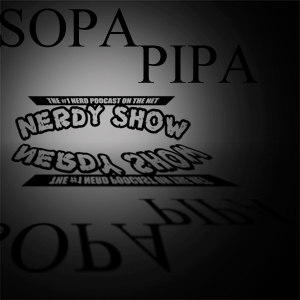 Today, January 18th, 2012, many of the biggest, most important sites on the Internet have blacked out in protest against two dangerously ignorant pieces of American legislation which could destroy the Web as we know it.  Instead of blacking out, we’re doing what we do best, speaking out.

Join Cap, Hex, our sci-tech correspondent, Jon and Geek Cr3d writer, Jessica for a discussion about what SOPA and PIPA could mean for the internet and even Nerdy Show.  Hint: it’s bleak. What’s more, rumors of their death have so far been greatly exaggerated – there’s still a fight to be fought. If you haven’t gotten the lowdown on this legislation yet, now is the time, and if your well-informed stoke your rebellious fire along with us. Thanks to deadalready for requesting this very poignant microsode.

UPDATE: Our pal Adam WarRock decided to throw in his two cents with this aptly named track. This episode’s release and this track passed like two silent boats in the night, or it would have made it on here, so this is our chance to throw it on! Enjoy!