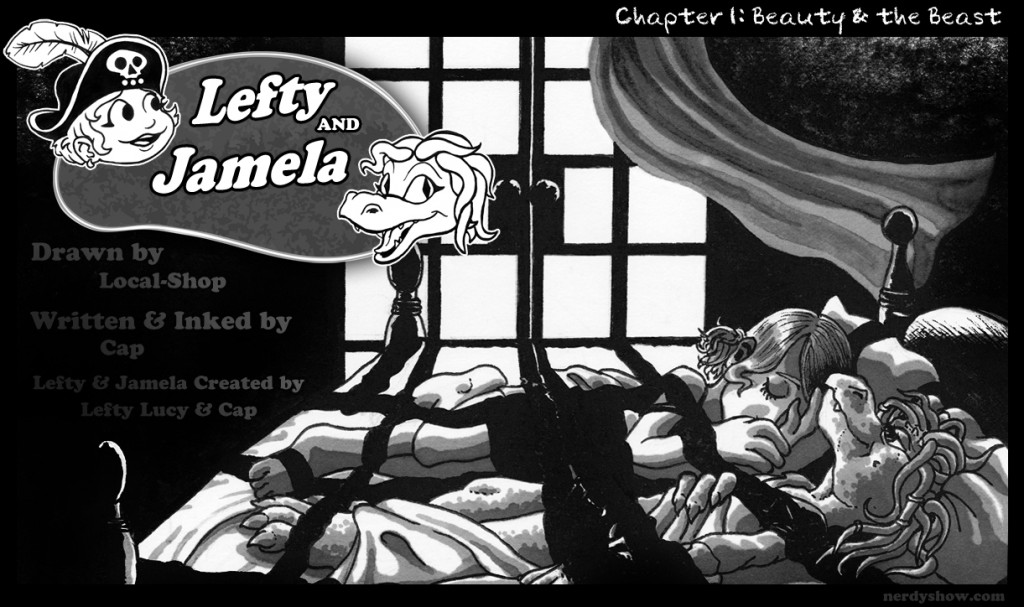 When Ruel told us that the Dungeons & Doritos party had spent two whole weeks on the Isle of Mages my head just about exploded. We had to have a brainstorming session on the spot to figure out what went on.  Lefty and Jamela’s fast-acting friendship had only just started and there they were, trapped in a sparkly paradise!

Nothing we could’ve said in-game would’ve really summed up the craziness that Lefty Lucy and I knew must’ve gone on.  Of course, there was some hint to it in the episode, especially with stuff like Barty’s web cam scam (don’t worry, you’ll see how that came to be), but I mean TWO WEEKS.  The idea to do a web comic happened soon after and I’m immensely pleased that we were able to bring it to fruition.

Lefty & Jamela will be coming to you weekly. It’s a limited series with a finite ending as soon as the two weeks end (episode 15), but coming to you a strip at a time – we have no idea how long it’ll run.

The series starts a day after the incident with the golems in episode 14. Wounds have healed via the Mage’s magicks, reports on the “incidents” have been filed, and following the attack Lefty and Jamela have moved into one room together. BFF slumber parties every night!

Expect to see some frames that look much more like a traditional web comic in the near future. This first strip is a bit of a stepping stone into what’s going to be an extended, and very special sequence. Consider these next few strips a “cinematic opening”. Come next strip I think you’ll get the gist of where this is headed and what the chapter title is all about.

I’m really pleased to finally be working on a long form project with Local-Shop.  We’ve done a lot of one-off pieces in the past and she’s done a lot of D&D bonus art (much of it featured as support perks), and she was also interviewed by me way back in Episode /34/. She came up with a unique toonish style for the Lefty & Jamela web comic that I love.  It’s super-fun to ink.

I won’t be this long winded all the time, it’s the debut so I figured that was my chance to run at the mouth.  Hope you guys enjoy it – let us know what you think in the comments, on the forums, or via e-mail.