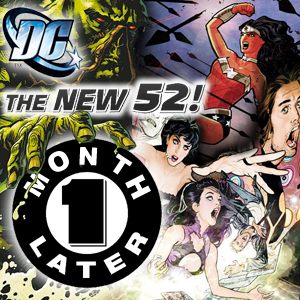 DC Comics has hit the reset button.  In a last ditch effort to update their classic characters, bring in new readers, and stay relevant they’ve reset the DCU with 52 new issue 1s.  Somethings are the same, some things are drastically different, and there’s a lot caught in between.  The Vertigo, Wildstorm, and Milestone universes are now all a part of the DCU, Batman and Superman have only been around six years are so, Speedy and Krypto, living together: MASS HYSTERIA! (Editor’s note: there’s a very good chance neither Speedy or Krypto exist anymore).

This upheaval of the norm is pretty awesome and there’s A LOT to talk about – good and bad.  Join Brian, Mike, Hex, and Cap for an in-depth discussion on the first month of the new 52. Also, the ever tardy gentleman geek, Luke McDuffee is back with a new Luke’s Late to Everything. With Vertigo finally a part of the DCU again, characters like Swamp Thing and John Constantine, can again coexist with Batman and Superman.  Scott Snyder’s Swamp Thing is one of the strongest offerings from the New 52, so Luke dove into the amazing work that came before it (and is sure to be a part of the new continuity): Alan Moore’s run on Swamp Thing.

Sex with plants, sexism in comics, the power of indies, letters from fans, and 52 reasons Atomic Robo is better than everything else.  Hop onto this new Nerdy Show adventure before it’s just a back issue.  PS – We’ve now read the new Aquaman.  It is totally awesome.