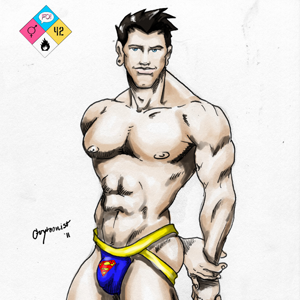 After last episode’s fiery tirade that nearly ripped the show asunder, the Flame On! boys are back and fabulous as ever! We’ve got a lot of exciting news, but you’ll have to tune in to hear our sensational announcement about Johnny McGovern (The Gay Pimp) and his saucy new single “Sexy Nerd”! Tune in to get hot, get geeky, and get off!

Hunky Jason Mamoa stars in Conan The Barbarian and shows us how to defeat the forces of evil (and sagginess) with his perfect perky ass! We also discuss Rise of the Planet of the Apes, the Fright Night remake, and the extras on the upcoming Green Lantern DVD.

The cancellation of Eureka has got us down, but there are still a bunch of great nerdy shows for us to talk about like Doctor Who, Alphas, True Blood, and Torchwood! Cats don’t get along well with bears (sorry Bryan), but we do love the new Thundercats show! Meow!

Then we have some shocking news: Bryan and Jarrod are gay! (cue dramatic music, and then transition into a Madonna “Express Yourself” remix) Hear the boys talk about their coming out stories!
We’re all good at being nerds, but it’s not easy when it comes to love, so listen up for our Dating Advice segment where we answer questions from listeners Dan and Matt: Who pays for dinner? and Are ex-boyfriends meant for friendship or emergency sex?

See? We are nerds after all! We’re talking about science! We appraise the new Diamond Planet! It turns out Uranus is a gay’s best friend!

There’s a lot going down in the world of comics with the new DCU (including Flashpoint, the new JSA, and Superman Beyond), but there are a load of other comics we can’t wait to spill! Marvel’s got us talking about their new Ultimate Comics brand, Fear Itself, and everything X-Men related! But also keep an ear to the ground (and your ass in the air) for these indie books: Game of Thrones, Bionic Man, Kick-Ass 2, and the shocking death of Hellboy!

Oh lawwwd that’s one helluva show! After listening, you’re going to need a cigarette. Flame On!