The E3 convention hall’s second day of business.  The conferences are over, all that remains is to discover the unknown!  E3 is comprised of two massive convention halls filled with crazy booths as well as a press and industry-only section of offices and meeting rooms that companies have their most exclusive showings in.  Mike, Brandon, and Matt have made their appointments to get behind the scenes looks at as much stuff as they can – but they’ve also got a special quest: get hands on with the Wii U at all costs!

Brandon, Mike, and Matt’s E3 2011 adventures continue! This time they’ve brought some new friends along for the ride. Including Marty McFly voice actor, AJ Locascio and the always ass-kickin’ Hop Hop Gamer. Check out the sights and sounds of E3 day 2 and thrill as Mike and Brandon attempt to hook AJ up with a break-dancing booth girl named Domo.

What else went down on day 3? Check this out:

Hear the guys talk about this and other experiences in our E3 Day 3 Podcast. 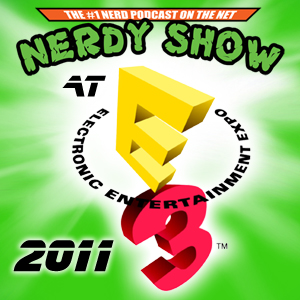 Is there something you want us to seek out in the convention hall? Do you have a hot tip about a game, accessory, or something cool going down? Let us know! We’re covering this massive event for YOU! Head on over to the Nerdy Forums and let us know what you want us to check out.