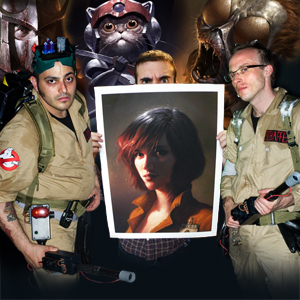 The nerd world revolves around pop culture.  Our collective psyche feeds off of our love for the cool and kitschy things that we obsess over.  For some of us it manifests in collecting or cataloging, for others it manifests in creativity and fan love.  These days a little fan love can go a long way and in this Culturesode we chat with three gentlemen who are making a profession out of it.

Join Cap, Hex, Tony and Kristin for two lively interviews three gents balls deep in some pro fan love.  First up, the man who’s brutally realistic Ninja Turtles portraits have taken the internet by storm: Dave Rapoza. In addition to drawing crazy-amazing pro fan art, Dave is a freelance artist who regularly works for Wizards of the Coast and has created some killer art for Magic: The Gathering. Next we speak with the ringmasters of Epic Win Burlesque: magician Nelson Lugo and rapper Schaffer the Darklord.  They’ve recently begun the second season of their whirlwind-success nerdy burlesque performance, debuted their “Rated R For Violence” show, and have announced that they’re going to be hosting this year’s Nerdapalooza.  All three of these guests specialize in very visually stimulating work, so open up their respective links in some new tabs, press play, and let us entertain you: