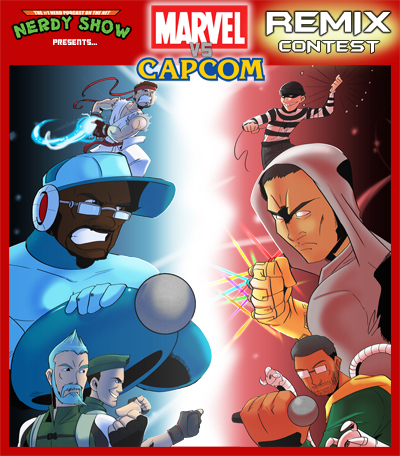 Spiraling out of the smash-success cross-genre fighting game Marvel Vs. Capcom 3: The Fate of Two Worlds, Nerdy Show has launched an epic remix contest featuring some of the hottest names in nerd rap.  Specializing in video games: MegaRan (aka Random), 8-Bit Duane, and My Parent’s Favorite Music. And specializing in comic book inspired raps: Adam WarRock, The Wordburglar, and Tribe-One. Remixers are challenged to create battle-ready beats sampling from either Marvel or Capcom music.  Sources can come from TV themes, movie scores and soundtracks, video games – any audio source pertaining to either franchise. The prize?  Beginning with MegaRan and Adam WarRock the rappers will select their favorite beats and create an original rap over YOUR track!  When the dust clears, one legendary 6-track mixtape will be left standing!

Nerdy Show has hosted remix and original music contests in the past, such as their Astronautalis-headlined Tetris Rap Attack and their DC Comics-inspired Blackest Night Song Fight.

The Marvel Vs. Capcom 3-on-3 Mixtape Melee contest ends July 31st at 11:59pm est. Entries should be submitted to: contest@nerdyshow.com

Marvel Vs. Capcom 3 is one of the most anticipated releases to hit this year. You’ve torn up the tourneys, you’ve snatched up the DLC, what next? While the greatest heroes and villains have decided the “fate of two worlds” there’s another battle brewing on ours. Nerd rap’s finest video game and comic-loving rhyme-spitters are on the warpath and their clash will be the stuff of legend. In the video game corner: MegaRan, 8-Bit Duane, and My Parent’s Favorite Music. In the comic book corner: Adam WarRock, The Wordburglar, and Tribe-One. They’re sharpening their tongues for a vicious brawl. But if they’re really gonna bring it, they’re gonna need the illest war drums imaginable. Do YOU have what it takes to craft the most brutal, battle-ready comic book and video game beats?

THE CHALLENGE Nerdom needs YOU to become the ultimate beatsmith. Craft a beat sampling from the virtually endless library of potential Marvel and Capcom-based music. There’s original Capcom game scores but there’s also the scores video games based on Marvel Comics, and the scores to movies and tv series, or other media based on either Marvel or Capcom. Your beats could be funny, they could be brutal – any style is appropriate! Above all, these beats must be awesome and only sample from either Marvel Comics or Capcom-based material. Check out the Nerdy Show episode Dropping Some Science to hear us debut the contest and talk about the plethora of sources available to sample from. And check out Crossover Crisis where we discuss Marvel vs. Capcom 3 in-depth. The doors are wide open – get creative!

THE PRIZES Your beats will be rapped over by the finest nerd rappers ever to rock the Internet and the final track will be featured on Nerdy Show’s Marvel Vs. Capcom 3-on-3 Mixtape Melee

Upon announcing the winners, all submissions will be hosted on nerdyshow.com for listening and downloading.

THE RULES All entries must sample from music pertaining to either Marvel comics or Capcom games – samples can come from video games, tv, movies, anything! (Tracks from the Marvel Vs. Capcom games can apply to both, but level music should be paired to the appropriate character.) These must be beats that you, yourself have crafted. Tracks should be no longer than 4 minutes and of a quality of at least 128kbps.

HOW TO SUBMIT Submit your contest entry to contest@nerdyshow.com (must be received by 11:59pm July 31st, 2011)

Be sure to put “Marvel vs. capcom mixtape” in the subject heading. Be sure that the e-mail address you send from is your primary address as it’s where we’ll contact you. In your e-mail please include:

Tracks will be judged based on overall quality, concept and execution and winning beats will be chosen by the rappers. Contact contest@nerdyshow.com with any questions.

MULTIPLE SUBMISSIONS Multiple submissions from a single entrant are allowed and multiple tracks from the same entrant may win. BUT only one Marvel track and one Capcom track will win per entrant.  Only one track from each category will be selected. Multiple submissions will not increase your chances of winning – quality counts – so be sure to only submit your best.

HOW LONG IS THIS CONTEST? From now until Sunday, July 31st, , 2011. All entries must be sent in by July 31st 11:59 pm est. Judging will commence immediately thereafter and winners will be announced on nerdyshow.com and in a future episode of the show.

RESTRICTIONS All contest submissions must be original works composed for this contest. Any submissions found to be fraudulent or not meeting the requirements of an official submission will be disqualified. Nerdy Show reserves the right to repost or redistribute any content submitted to contest.

LEGAL Nerdy Show claims no ownership of the submitted content, but reserves the right to host, play, and republish any submitted material. Please contact info@nerdyshow.com with any legal concerns.