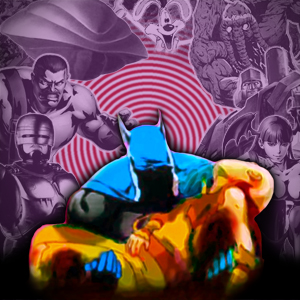 Behold all 3 parts of episode 4 in a road trip-sized episode. Stock up on these puppies and drive yourself to PAX East in style! Want the episode served up in yummy, bite-sized chunks? Look below!

First up: a rousing introduction in which the gang gets into some intense crossover conversation and other debates such as what statue Florida needs to erect to trump Detroit’s Robocop. Then, we’re joined by the master of video game parody music – brentalfloss! Us and Mr. ‘floss get up to some hijinks – discussing not just his illustrious career in music and YouTube videos, but some exclusive previews of what’s soon to come, tracks and videos in the works, and together we create what’s soon to become an internet sensation – Bizarrio, the third Mario Brother.

For Round 2 in this mash-up marathon – it’s a double-sized video game segment! Comics and video games combine and the Fate of Two Worlds are at stake! No, we’re not just talking about the long, long, long-awaited return of Marvel Vs. Capcom, but also the new MMORPG, DC Universe Online! We review both games , geek out about their mutual, mega-coolness, and get critical with some key flaws. Learn of one man’s quest to turn MvC3 into the sexiest sparring match ever, Triforce Mike’s DCUO hero, and most shocking of all… The WINNERS of our first Minecraft Build-A-Thon!

Can’t wait to hear who the winners are and why we picked ‘em? Adventure onward to the winning entries!

Crossover Crisis ends with not a whimper, but a BANG! First, sci-tech mind-boggles with talk of Evolutionary Robotics and LEGO-based robots that teach themselves to walk, and then COMICS. Nerdy Show is pleased to once again be joined by comic writing tag team Dan Abnett and Andy Lanning whose Infestation event pits Ghostbusters, G.I. Joe, Transformers and Star Trek against ZOMBIES. We talk to them about theri projects past, present and future including their continued awesomeness in Marvel’s cosmic realm with Annihilators, and street-level beatings with Heroes for Hire. This interview will be the stuff of legend. Five words: “Zombies vs. My Little Pony”.