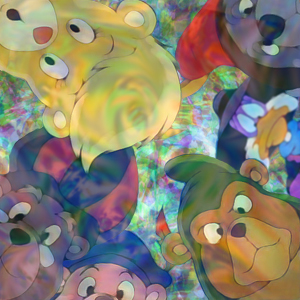 That said- here it is! Episode 3 of Season 4. We’re gonna do things a bit differently. To make sure you get your regularly scheduled Nerdy Show safe and sound via your iTunes subscription- we’re releasing the segments over a few days. So this week look forward to all parts of Drinkin’ Juice With My Home Bears… and seriously, guys… Don’t be a menace to Gummi Glen, they’ve been through enough.

The final segment of Episode 3! When all pieces unite it’s big enough to defend the nondescript city against Rita Repulsa’s minions.

First up is the music segment, in which Hex and Cap interview the mightiest duo in Nerdcore – Random and K-Murdock, who combined to form Forever Famicom.  This was on the last leg of their first tour as a duo and they rapped us a new asshole at A Comic Shop’s Geek Easy.  Thrill with us to their origin story, what the nerd music scene looks like from the perspective of a Sony-signed artist, and what future projects loom on the horizon.  We also debate about what’s the slickest time travel ride, ’cause, ya know… why not?

And finally… we mentioned it last month on the Nerdy Show/ OCAD ReMixMas Special… Our first Minecraft contest is here!

This contest is gonna be a ton of fun and there are some amazing prizes lined up.  Listen to the episode to hear us talk about the contest and the treasures awaiting you. And then click the banner above to find out how to enter.  Be sure to read all the rules to ensure that your entry qualifies! And also build in style with a skin from our contest co-sponsor, Minecraft-Skins.