Welcome, brave miner, to Nerdy Show’s FIRST Minecraft Build-A-Thon, co-sponsored by Minecraft-Skins. Each Build-A-Thon will have a different theme, and we couldn’t think of one more fitting for this video game-based contest’s debut than… other video games! On Nerdy Show’s Server of Awesome we’ve already seen some majestic video game-themed structures, so we know you’ve got the touch, nay, the POWER to deliver some jaw-dropping game goodness. We launched this contest in the Nerdy Show episode, “Drinkin’ Juice With My Home Bears“, have a listen for some additional details about the contest and the amazing prizes up for grabs. Check out the full prize list below, familiarize yourself with the rules, and GET BUILDING!

Devise the greatest video game-themed structure the Minecraftverse has ever seen! It could be sprite art, it could be a blocky re-imagining of something from a game, a location or object inspired by a game, or something so high concept no one has even considered it yet. Use rare materials, use redstone switches, wow us with scope or simplicity, most importantly craft something visionary – honoring the greatness of video games. All video game genres and platforms are acceptable for reference, save one… Minecraft itself. THAT is another contest all together. 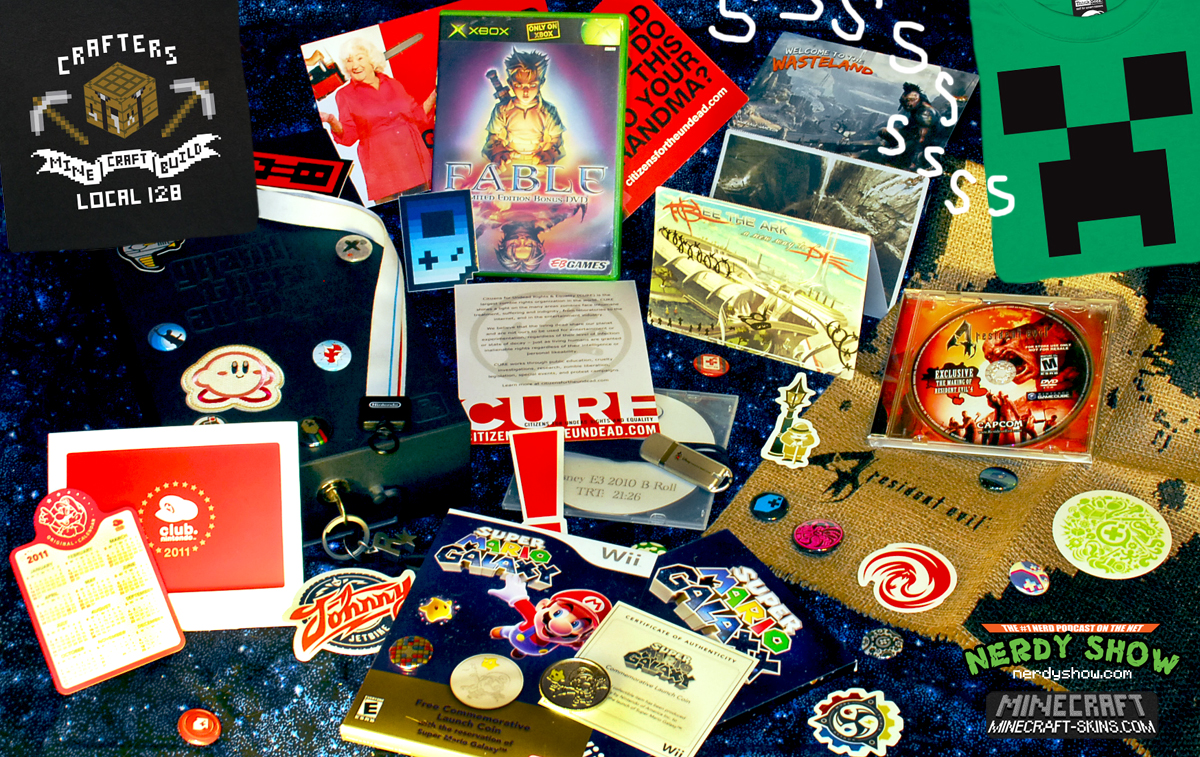 With this contest we’re offering up a grab bag of rare video game items, all of them unique. Since they’re so different, the only way we could think to appropriately pass them on is to have a turn-based system where the winner chooses what prizes he or she wants the most. The first place winner get’s first pick, then second, then third.

Additional items may be added.

For inspiration or more on Nerdy Show’s server, check out our Minecraft articles exploring the user-created structures, featuring world maps!

Listen to Nerdy Show while you build:

WHAT MAKES A CONTEST ENTRY?

You can submit as many entries as you like, but remember: it’s quality we want, not quantity.

Structures built before the start of the contest are allowed. However, structures submitted as previous Nerdy Show contest entries are not allowed.

To submit an entry you must:

Create an account on the Nerdy Show Forums (much like Minecraft, we’re still in Beta, so pardon the dust). Next, go to the Minecraft Build-A-Thon page and make a posting for your entry in the entries page. Say you have two entries, make a new page for each one, but please keep postings organized – If you want to add additional photos or descriptions to a submission (before the due date!) make sure that it’s added to your correct posting.

Postings on the forums will make or break your entry as we can’t guarantee that we’ll be able to view all the entries in person.

Take screen captures of your structure and upload them to your favorite image host. Use html to insert your images into your posting. Be sure to:

It’s okay for multiple people to have worked on a structure, but official entries must be made by the designated project leader. All winning prizes will be sent to the official entrant. Any division of prizes to others who worked on the project is not the responsibility of Nerdy Show or Minecraft-Skins. If there is a dispute about the ownership of a structure, it must be contested on the specific entry in the Nerdy Show Forums. If a dispute is not resolved by the end of the contest, the entry will not be considered for judging.

For video submissions, be sure to include “nerdy show” in the tags and label it as “Nerdy Show Minecraft Video Game Build-A-Thon”.

Your structure must be built on Nerdy Show’s Server of Awesome. This is a survival server. Monsters will be turned off for the duration of the contest, damage will stay on. OPs may provide materials, but are not obligated to. The server currently allows for 20 users to be on at a time. If you can’t log on, please be patient. If the server is currently down, check this thread for more info.

The Server of Awesome is a community. Rude or destructive behavior on the server or in the forums will result in a ban on both counts.

Some prizes contain scenes from teen to mature content games. Winning entrants under the age of 18 must have parental consent before receiving these prizes.

All entries must be posted during the duration of this contest (January 22 – February 12, 2011) and are subject to the rules of this contest and the discretion of Nerdy Show. Any submissions found to be fraudulent or not meeting the requirements of an official submission will be disqualified. Nerdy Show reserves the right to repost or redistribute any content submitted to contest.