Sightseeing on the Server of Awesome: Month 2 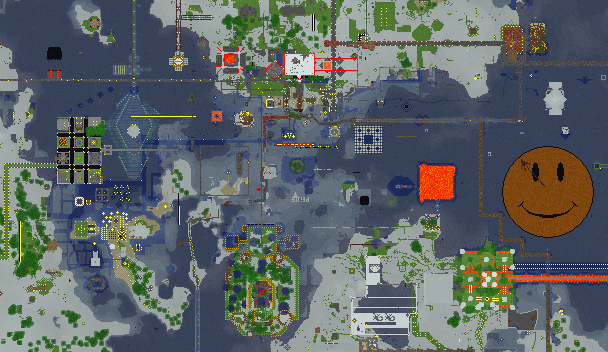 Hey gang, it’s Kristin, aka ckrickett – I’m back! It’s only been a month but so much has happened. We’ve seen massive updates, monsters in multiplayer, and amidst that craziness our Minecrafting ranks have grown.  Creativity on the Server of Awesome only gets more overwhelming. There is a TON of new things to check out!

Onward to photos from my further adventures in the Nerdiest Land in the Interwebs, details on this month’s biggest changes, and new maps!

Monuments in the Name of Nerdy Show 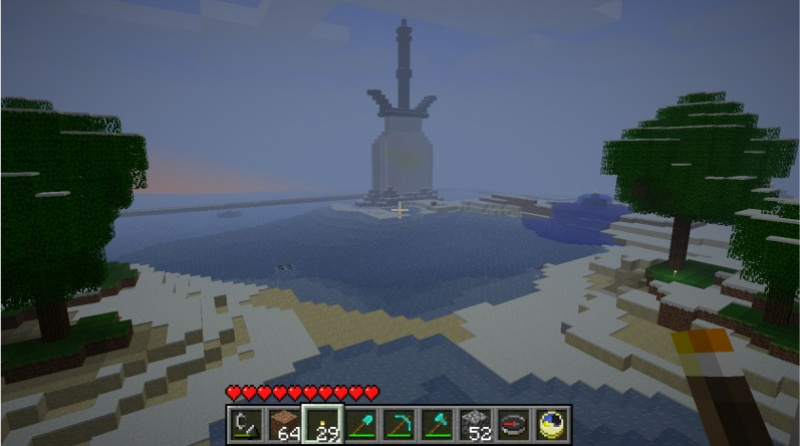 By now everyone’s seen the statues of the 8 Bit Theater gang that was constructed.  (Click here for a nice vista with the party and the recently added Swordchucks) But there’s a new tribute to Brian Clevinger in town. Twothums, C1h1r1istopher, and Cortoth (with materials assistance from Sage0) made a GIGANTIC Atomic Robo head with glowing eyes. WOW! It is freaking huge, and looks totally creepy at night. But you gotta love him! Dr. Dinosaur is gonna lay an egg when he sees this: 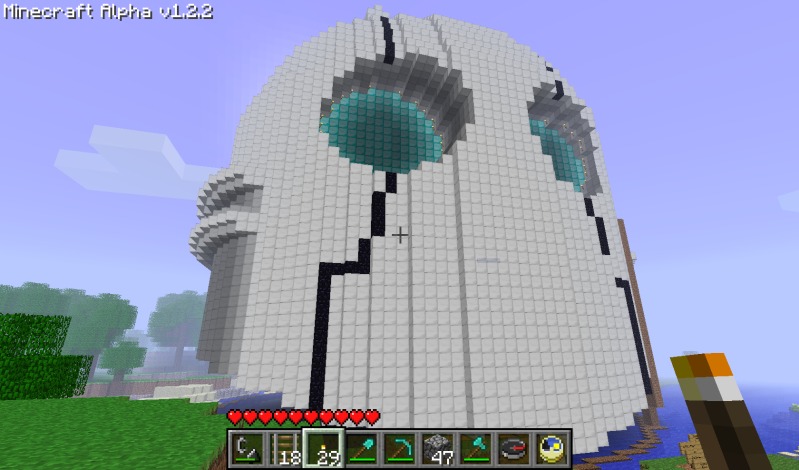 That’s one massive mofo of a robo! 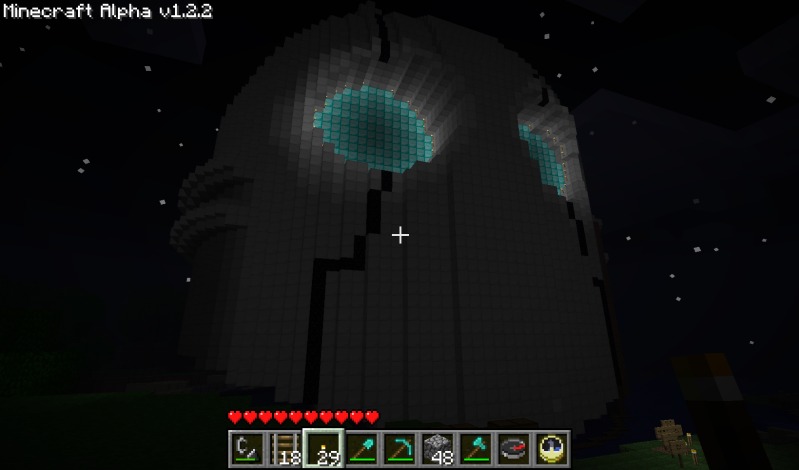 Did you know that the Server of Awesome has it’s own theme park? BOY HOWDY does it! Heavyarms553’s Park of Things that Shouldn’t Be Flying is a grand display of one Mincrafter mastering the impossible 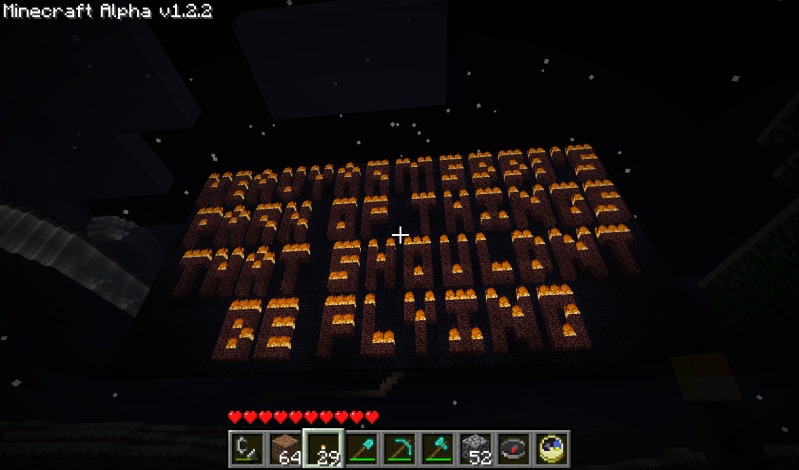 Hovering ominously many stories above the ground is a cruise ship with pools multiple decks, and right next to that is a nuclear submarine. FREAKING FLYING! 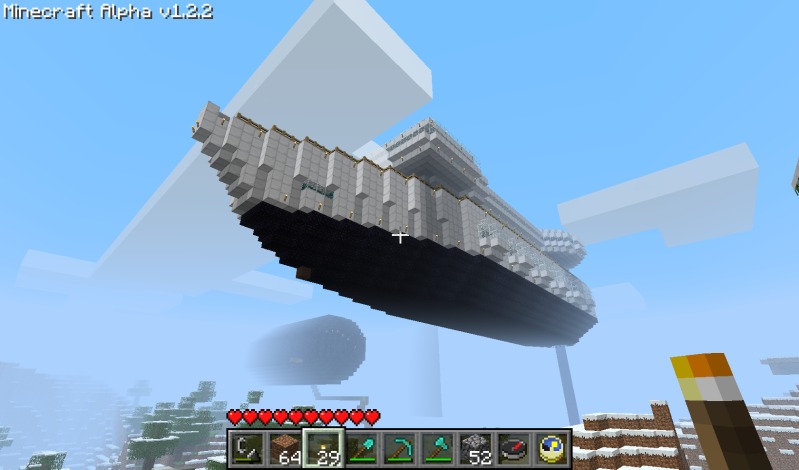 Flying ship in the sky, and in the distance you can see the submarine 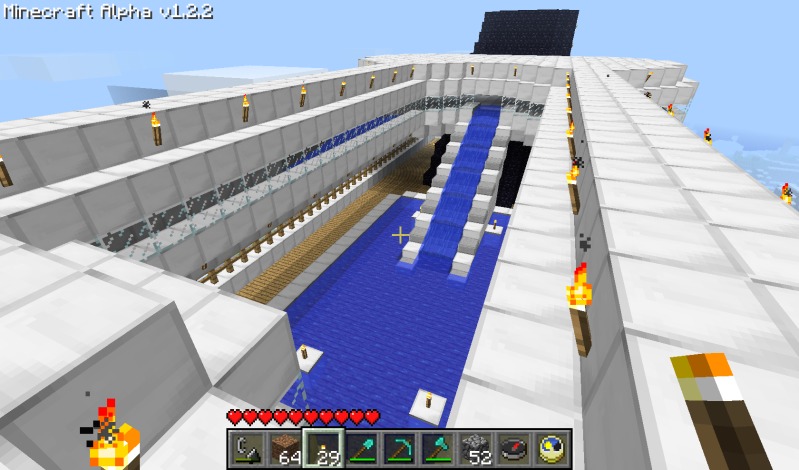 This cruise ship comes with all the amenities. Several posh decks, a fine lit pool, and even a water slide.

Everyone builds themselves a home in Minecraft, but some people go the extra mile and create for themselves posh living and amazing cubist architecture.  Atop of a frozen lake you’ll find Mopkins grand sandcastle. Classy and brilliant, better than the real thing – it’s not filled with broken glass and mean sand crabs! 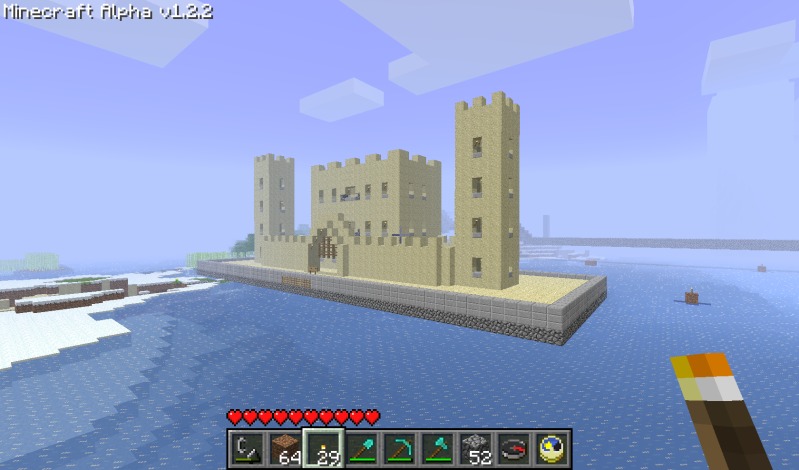 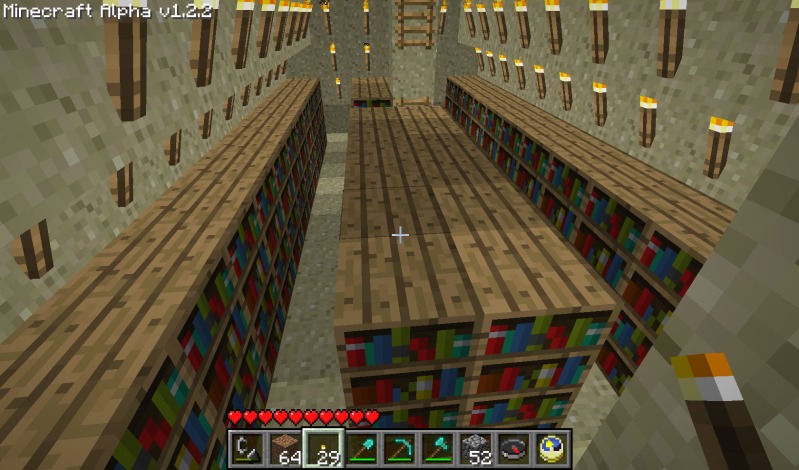 A mighty fine library inside this sandy fortress. 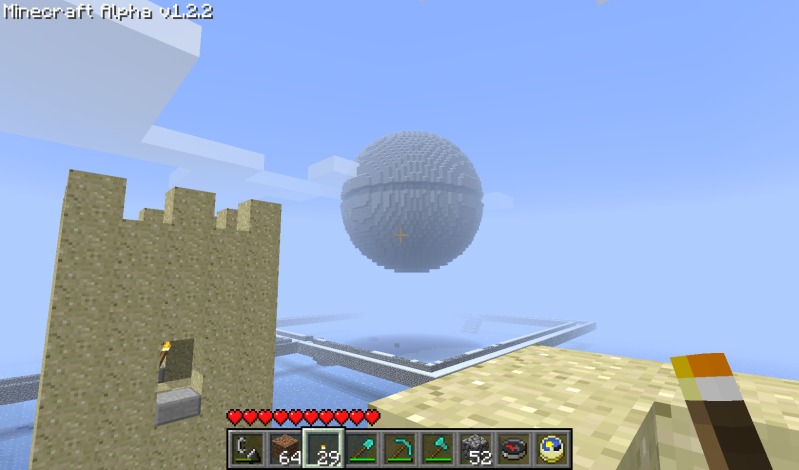 A major plus to this fine piece of digital property is it has a great view. I can just imagine lounging on top of this sandcastle drinking a hot toddy and dreaming about all the adventure happening on the Death Star.

Kahalis, master of the mega-structures has struck again. Somewhere off the beaten path, you walk through a forest for what seems like hours and then you come across this giant steel and diamond structure. It’s like an Elven palace! Is it the capitol of his reported city that he’s been building? Another hidden cathedral? All I know for sure is the man likes to hypnotize with his massive and mystical glass ceilings. I was captivated from the moment I walked into it. 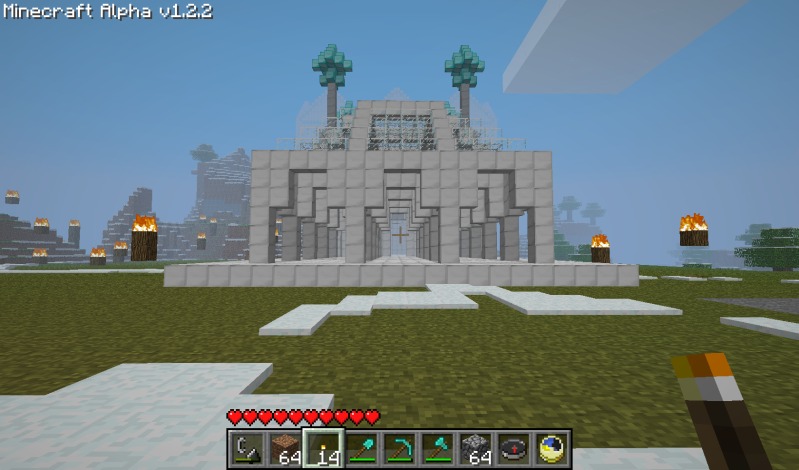 Walking up to the massive and glorious building it looks beautiful, but this sight alone doesn’t prepare you for the wonders inside. 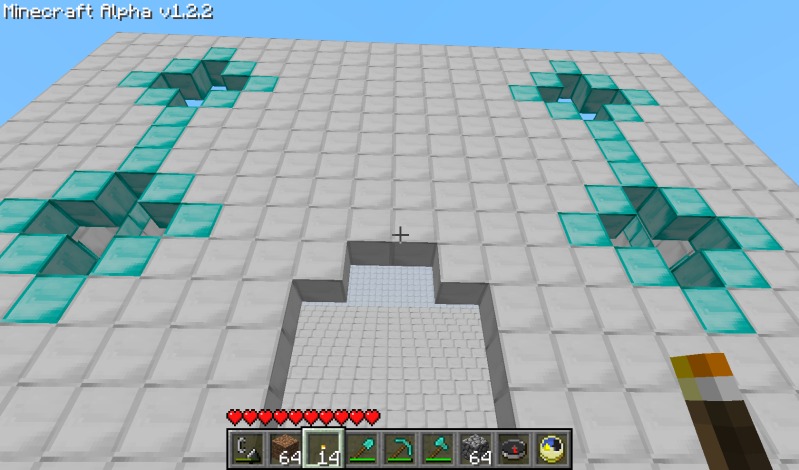 Only the finest materials were used. Diamonds ornately decorate these elaborate windows. 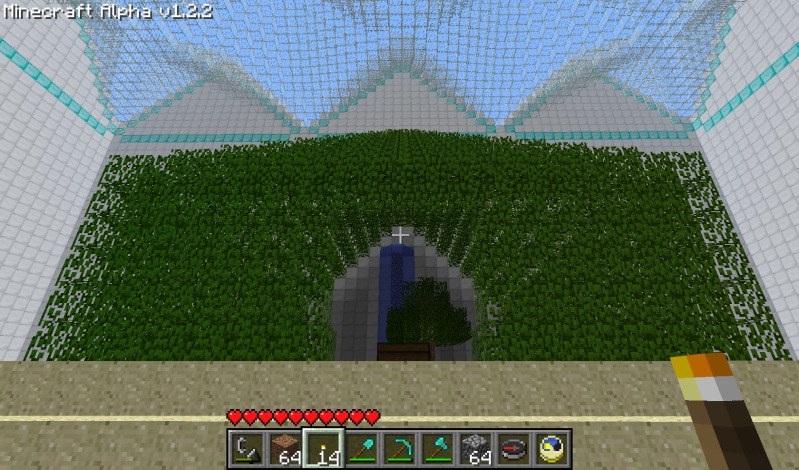 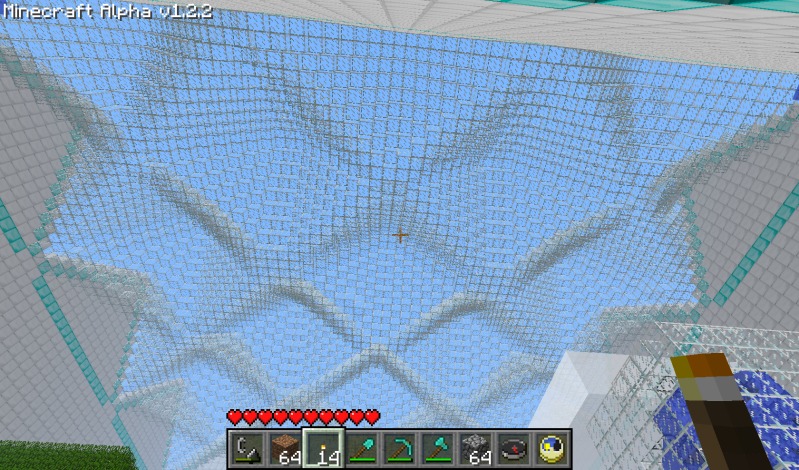 The absolutely mesmerizing and massive glass ceiling. From the bottom you can feel yourself getting pulled in. If you’re atop this building the ceiling looks like a sea of glass pyramids painstakingly created as some sort of mystical monument.

In the last month we’ve started to see a bunch of amazing art made to be seen from the sky. A great example is the Dungeons and Doritos logo made with obsidian, lava, and water by Twothums. 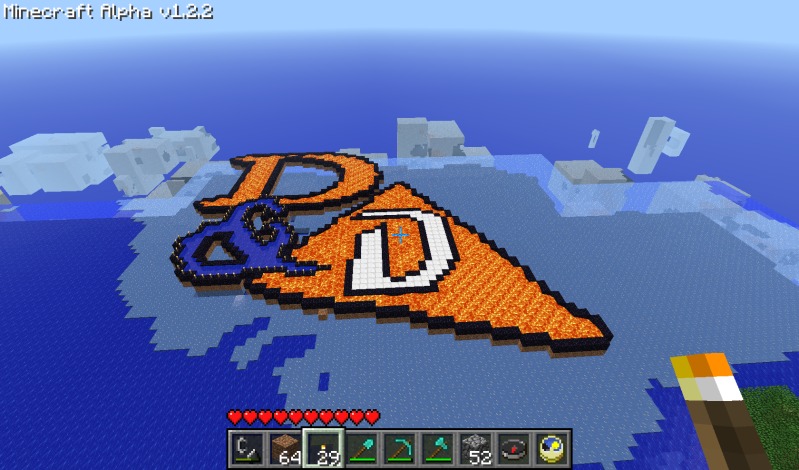 And Kiirlo’s Watchmen Pin made in obsidian, gold and bloodstone: 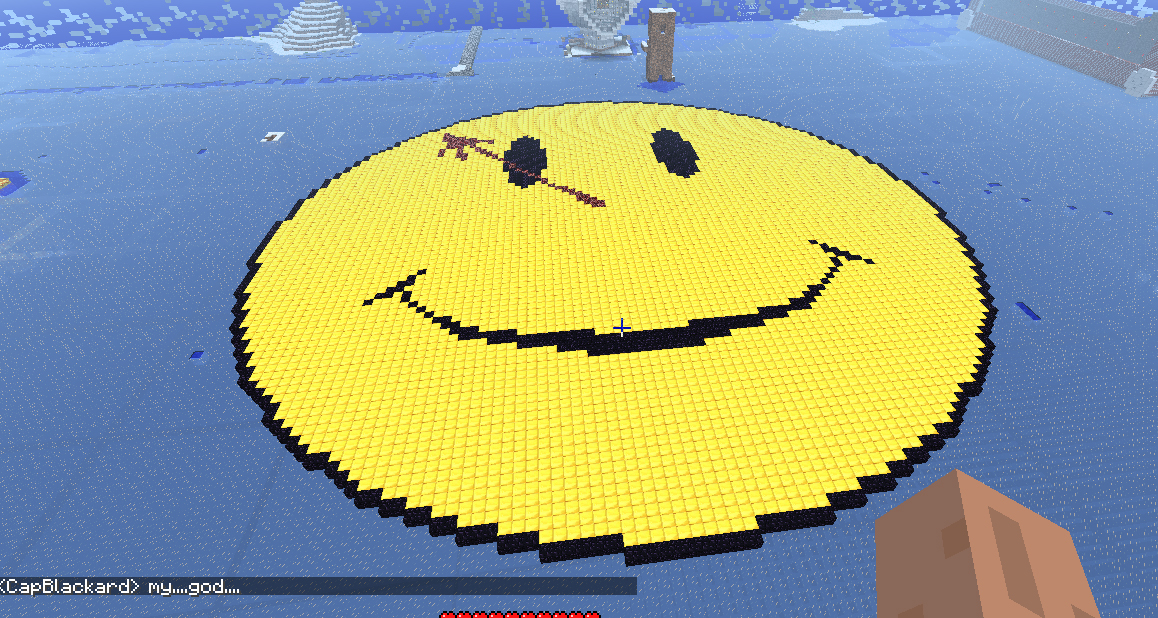 That isn’t the only amazing thing that can be seen from the sky!

Thanks to the generous donations of some amazing Minecrafters the server has been upgraded with faster internet, and more RAM.  We’ve also tricked out our backend with McMyAdmin so we can keep better taps on the server and schedule frequent saves and resets to keep the server feeling fresh.  The more the server grows the better hardware it’ll take to keep it running well no matter how many resets we have, so help out the cause with a donation or buy a swanky shirt!

In the past month, Notch has focused his updates on improving multiplayer (yay!), but there’s also been a lot of severe glitches (aww…).  But hey, the game’s in Alpha, so these things happen.  The biggest change (aside from random injury at login) is the addition of monsters bringing the spirit of adventure and fear of singleplayer to multi at last!  Unfortunately, the monsters are buggy as hell- leading to unfair battles, surprise death, and serious lag.  So, until Notch has sorted the beasties out, we’ve turned them off.  Fortify while you can!

If you’ve never explored our server – check it out!  There is always something new and exciting to see. And don’t forget to e-mail me with your photos and adventures at ckrickett@nerdyshow.com.

Experiencing any technical difficulties such as the “ghosting” bug? E-mail minecraft@nerdyshow.com!