Media Podluck: A Christmas Evening Together (2009) 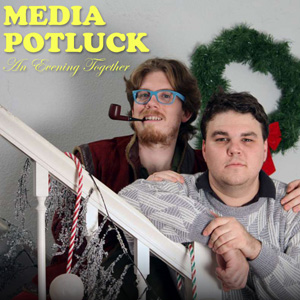 Hey guys, Cap here.  As some of you may know I have a side project called Media Potluck.  It’s actually what propelled me into this wacky world of internet journalism in the first place, and is one of my favorite projects. Media Potluck‘s goal is to discover and share eclectic or forgotten media of all kinds – music, movies, comics, even advertising – everything. If it’s amazing, funny, or both we bring it to light and if we can, investigate the whos, hows, and whys behind it. As of late, Media Potluck’s been in a temporary hibernation while other projects get into gear, but while the Potluck slumbers, its efforts continue with Audio Archaeology, a spin-off article series over at Consequence of Sound.

Two years ago I started a tradition of making an eclectic holiday compilation and I wanted to share it here.  It’s not 100% nerdy, at least not obviously, but scan over the track list and the write-ups and I think you’ll get the idea. I’ll be reposting Media Potluck‘s other holiday treas here over the next few days and weeks. Happy Holidays Nerds!

Escaping to a secluded cabin in North Carolina, Cap and Nick discuss some of their favorite Christmas music, moments, and memories. Enjoy an eclectic mix of music across the decades as well as reflections on the holidays; including how to kill a boar, how holiday music playing in steak restaurants can be life changing, and a Floridian answer to snow. Listen in as two friends share a Christmas evening together.

Enjoy some photos from the trip.

Media Potluck: A Christmas Evening Together