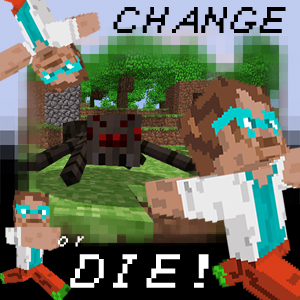 This is it!  Season 4 begins here!  New site, new format, nude everything!  In both evolution and darn near everything, no words ring more true than “change or die”.  So we’re changing it up –  big time!

At the beginning of each month, a new episode of Nerdy Show Season 4 drops. We’re doing things Ikea-style in süper-fün modular segments. Like the Minisode format we debuted last month, each segment is a focused discussion with its own topic, guests, etc.  But don’t fret, True-Believer, episode-length discussions and grand scale hi-jinks live on like never before.  At the end of every month Nerdy Show Prime will rock your world with grand-scale episodes the likes of some of our finest prior escapades such as Were the Wild Things Are, Episode /34/, Fettophiles, and Peaks Freaks to name but a few.  That plus monthly Dungeons & Doritos, new Video Game Minisodes, Nerdy Strip, videos, etc. means Nerdy Show is still weekly and extra classy.

Change is the theme of this month’s episode: positive mutations, brilliant new ideas, and stodgy old ways giving way to a bigger and brighter future.  In video games we discuss the indie game taking the world by storm: Minecraft.  We talk about what makes this crazy, blocky game so damn amazing, regale each other with adventures above and below the surface of the Earth, and discuss the Minecraft phenomena- including an interview Bobby Yarsulik, a musician who’s written an entire album of Minecraft-themed music!  Oh yeah, and… PLAY ON THE NERDY SHOW MINECRAFT SERVER:

During our music segment we’re joined by Adam WarRock who’s landmark comic book concept-album, The War for Infinity has JUST DROPPED!  Adam’s in a league of his own between the worlds of Nerdcore and Indie Rap doing what few have done before him… actually rapping about comics, not just referencing them. Also in nerd music, we play an excerpt of Cap’s interview with Gerald Casale of Devo which he conducted last month for Consequence of Sound, and Hex clues us in on the next big nerd music project over at Kickstarter.

In sci-tech Jon shares with us the big changes in the bio-engineering industry and robotics: silk worms that spin indestructible spider silk and robots that lie, daydream, and fire arrows.  Are they abominations of science or paving stones on the path of progress?  Finally, in comics, we discuss the comic book industry: why things need to change, how Mark Millar both does it right and wrong, and all the big changes that went down at this year’s New York Comic Con.  All that and Cap and Brandon even have time to talk about Legend of the Guardians: The Owls of Ga’Hoole and how brutal it is, seriously.

Do you want to listen to the episode classic-style in one huge block? Yeah, we got that too: