Earlier this week, we opened the Nerdy Show Minecraft server to the world.  Triforce Mike, Brandon, and myself (click to see our avatars) had been building in this strange snow-covered land for some time before the debut of Season 4.  And during that time we made many discoveries and created many structures over several continents – some of them major landmarks, others secret to this day. If you haven’t yet set foot in our strange world, please do pay us a visit:

In the few days since we’ve opened the server up, all sorts of tremendous changes have taken place.  It’s nothing short of incredible.  The amount of work, craftsmanship, cooperation and ingenuity that has been put into the world by Nerdy Show listeners has been totally mind-blowing.  Every time there’s something new for me to be in awe of. It’s always fun to explore a new Minecraft world above and below, but it’s been amazing exploring now that it’s peppered with mysterious mines and structures great and small.

We wanted to share with you some of the sights on the server, some of the original Nerdy Show structures, and some of the crazy things that have been built to date.   Think of this a photo essay or a travel brochure for our ever-changing, virtual world. 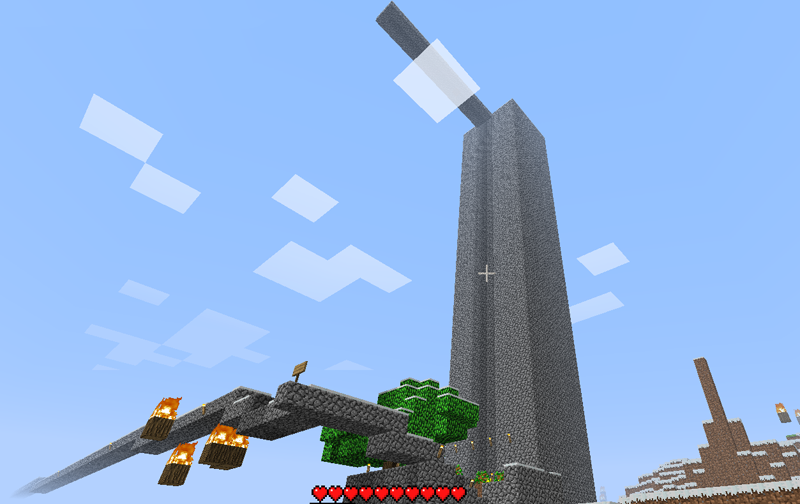 This is Nerdy Show’s Fortress of Awesome.  Built right next to the spawn point.  A modest house and garden below, with a massive phallic symbol erected by Brandon.  At the top of the platform is a brick of diamond.  Seen here is also the beginning of Brandon’s continent-spanning Highway to Hell.  More on that later. In recent time the Fortress of Awesome’s tower has been expanded to have an even larger tower encase the original: 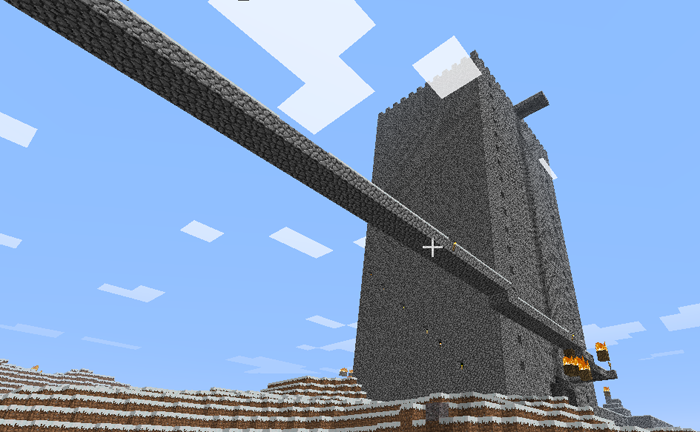 “In my Father’s house are many rooms; if it were not so, I would have told you.” – Jesus H. Christ

The new Nerdy Show Fortress is a MASSIVE structure and is all vacant space.  Come on in and make your own castle inside our castle.  Replicate Silent Hill, famous interiors from sitcoms, fill it with booby traps – the possibilities are endless.

Built below the Nerdy Show Fortress is our first mine and Brandon’s strip mine (a hole as big as the tower).  Flowing in the caves beneath the fortress is Triforce Mike’s wacky water slide.  Just find the start at the ocean, where melted water is flowing inland into a cave and get ready for a subterranean splash-down.  Also on the waterfront are several new structures including Bob’s Undersea Labyrinth, Kahalis’ Dirt Palace, and the Nerdy Show sign.  No, we’re not so vain that we made our own sign, you guys did that for us – thanks! 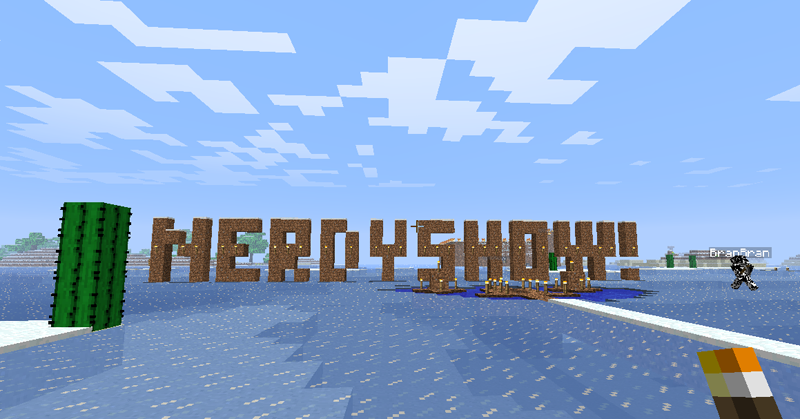 The new Nerdy Show sign by Kahalis, original by SpaceVagrant

That’s Bob’s Undersea Labyrinth in front of the sign.  Be cautioned, I have never been so lost as I have been down there.  What started as a hope to build a Zelda-style Water Temple unearthed a lava-filled cave system that can turn you around completely.  Jon and I entered some caves on an island miles away, got lost, found two mossy cobblestone rooms filled with zombies and ended up in some familiar, but inescapable territory within the Labyrinth.  Bring a compass! (Visit the small cave next to the ocean to find a treasure chest FULL of compasses thanks to Kahalis.)

Kahalis’ Dirt Palace is mind-blowing.  Every player has contributed some amount of dirt to make his dreams a reality.  This is a shot of the front of it, next to his “Cac-Tower”: 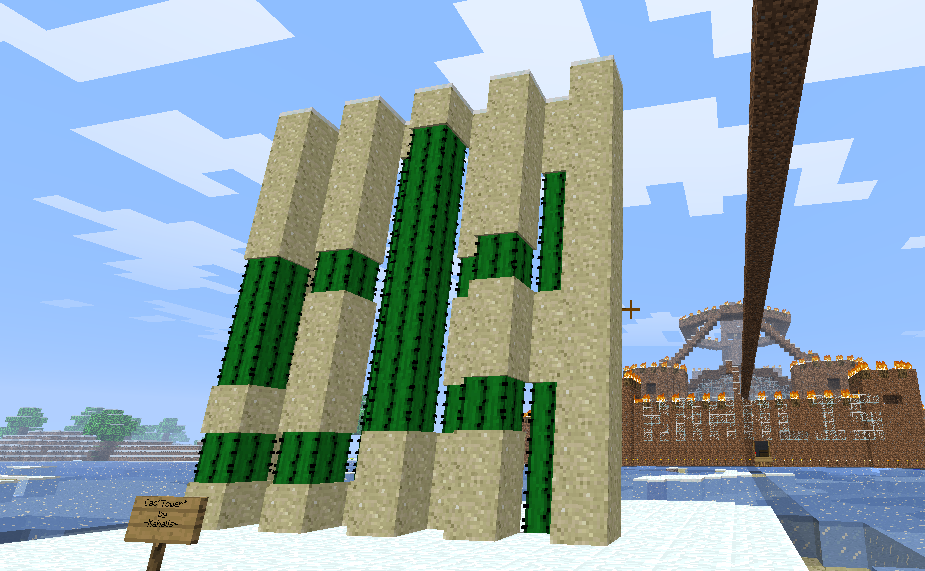 A shot taken by Kahalis from his railway system of the cube moon rising over the Dirt Palace: Upon venturing within the Dirt Palace’s terrifying interior at night, I felt like I was going to be sacrificed for wandering haplessly into this eerie Lovecraftian cathedral:

Also near the spawn point is Catto’s Dirty Dick Monument erected in honor of Triforce Mike, and SpaceVagrant’s magnificent tower. Only a few hours after the server became public I was shocked to see a massive structure that looked like a colosseum being built on a hill not far from the spawn point, from another angle it looked like maybe it was supposed to be Battersea Power Station, by the next day if had become SpaceVagrant’s sleek and gorgeous residence, a fine piece of architecture: 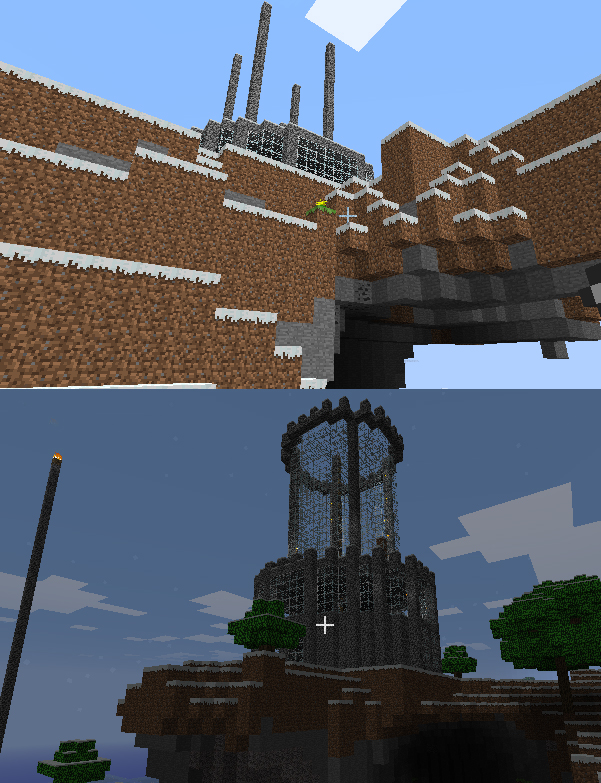 It’s been a while since I walked down the Highway to Hell, I can only imagine whats down there these days.  As it was when the server launched, it spread through the server’s magnificent snow-covered vistas both “natural” and man-made, such as Triforce Mike’s dual waterfall seen above. 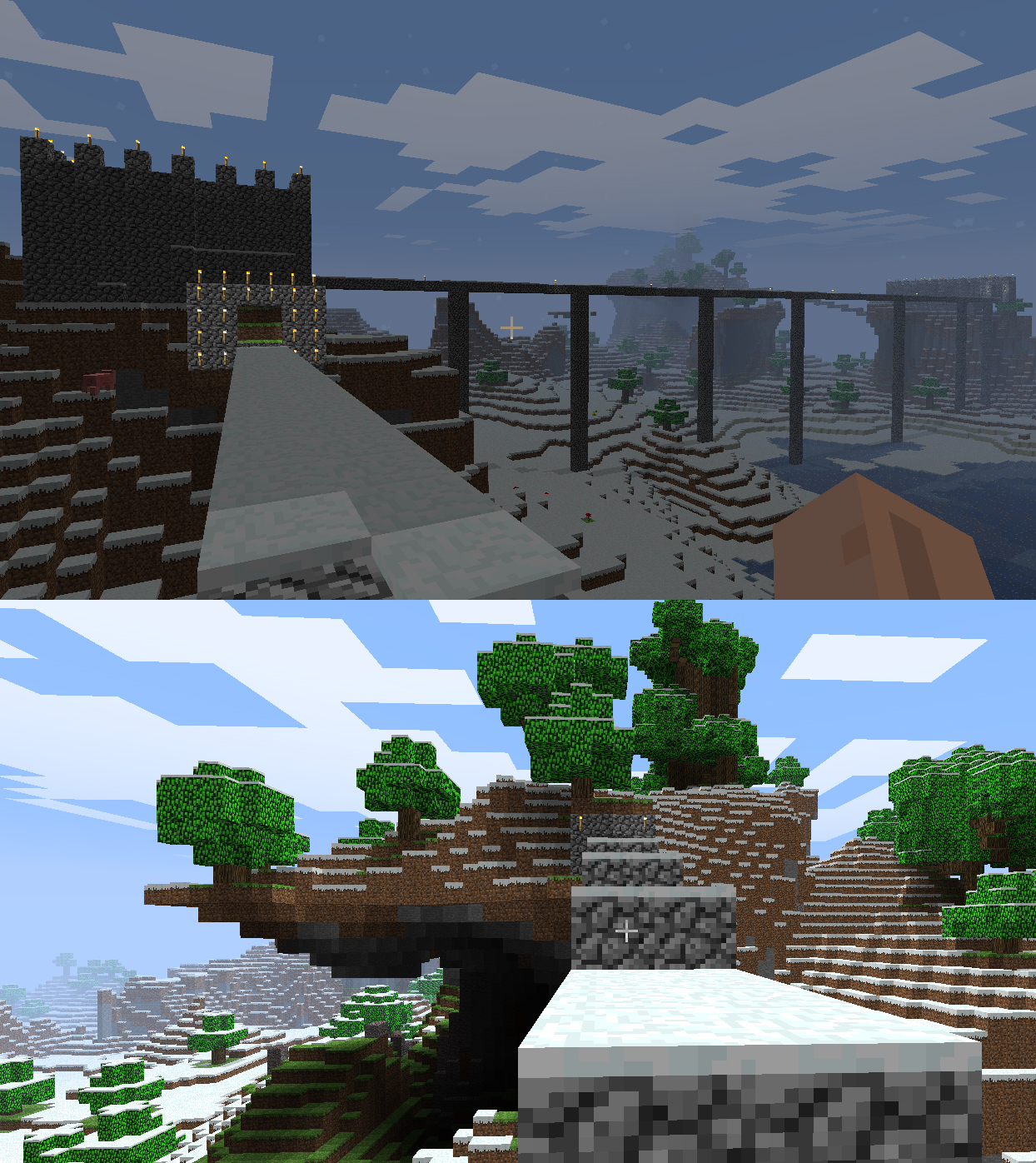 Last I knew the Highway ended at a massive structure made by Brandon where he sealed off an entire mountain inside an oppressive and scary box.  He calls it “More-door” I call it “Satan’s Business Plaza.” 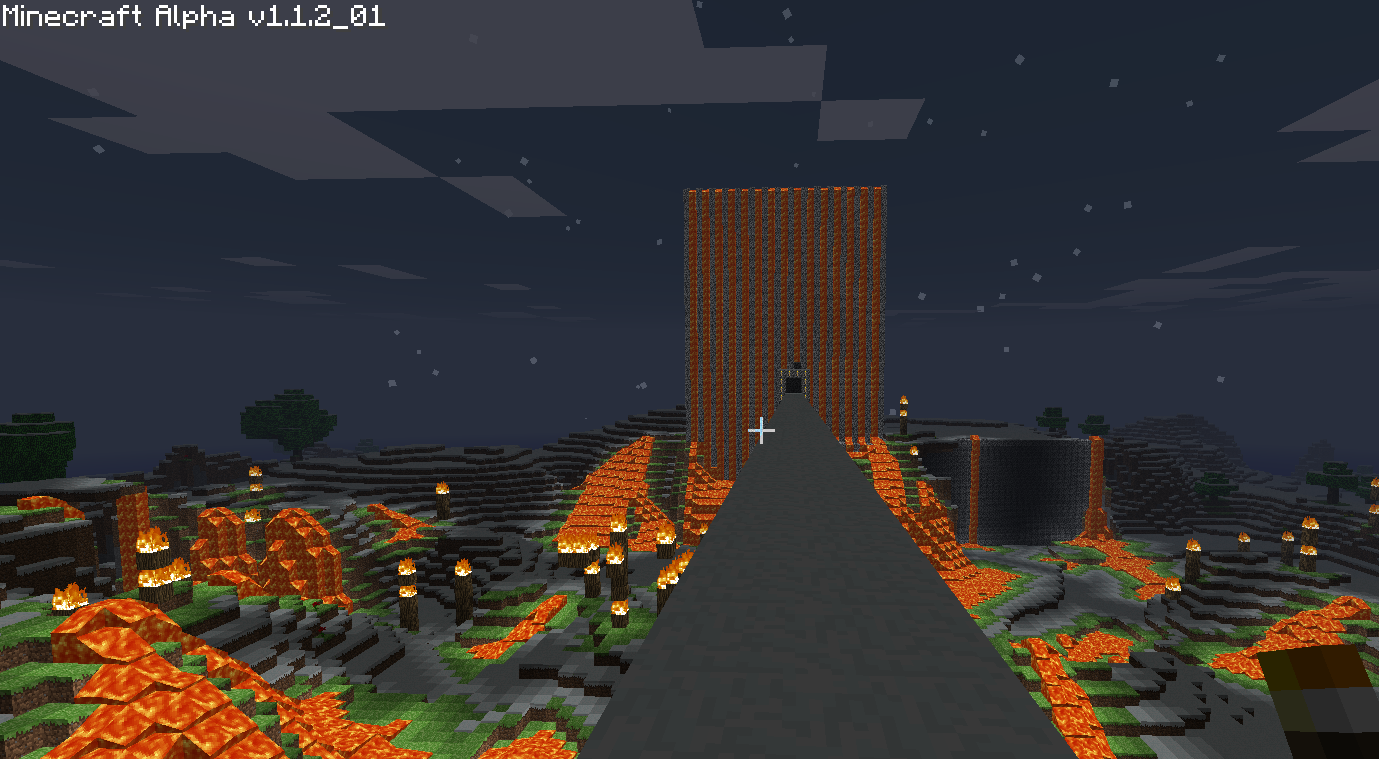 Behind the fortress of awesomeness is one of the great community pushes so far: a solid gold Triforce.  All the gold was donated by brave and caring miners to be smelted and assembled by Arkais.  It is truly a thing of beauty: 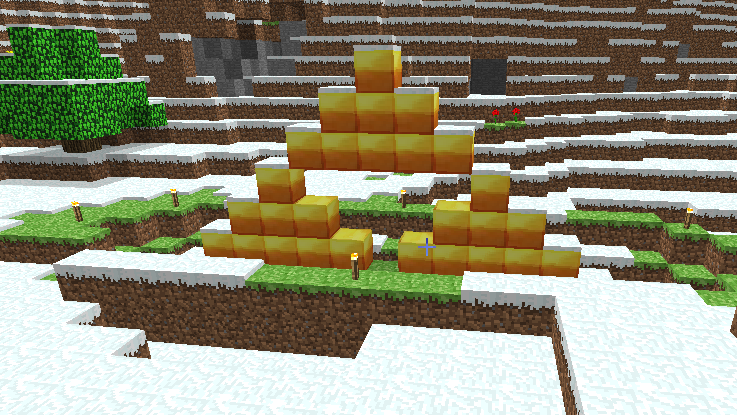 Nearby, below the surface, our resident moleman, Duraphago has dug some massive holes. In one of these holes he’s currenlty building a Mayan-style temple complete with the murmurs of the undead if you listen to the stones whisper. 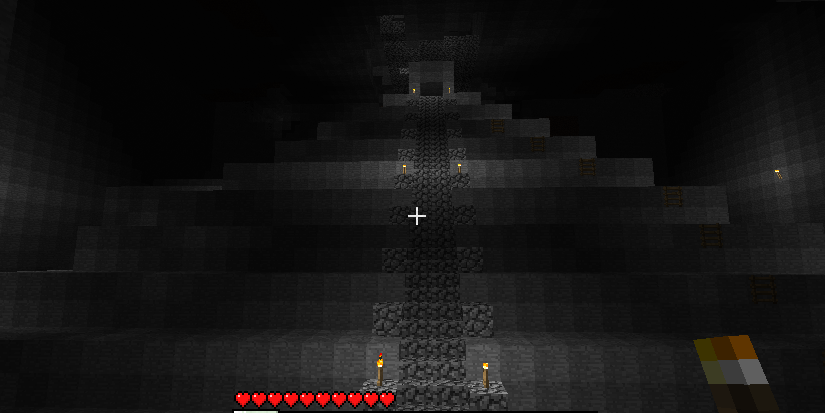 If you follow the stone path near the Triforce and travel down it a long, long ways you’ll reach BranBran and Kahalis’ gorgeous and amazing structure, the Skull Fortress: 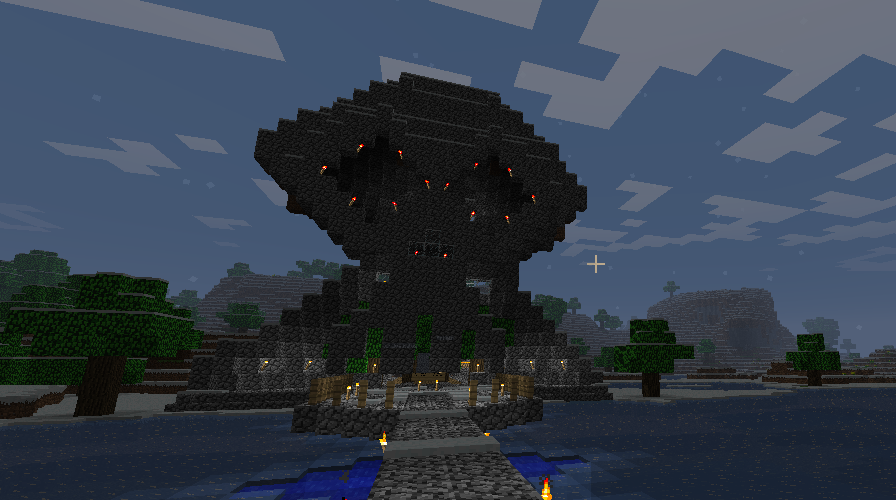 This building isn’t just impressive from the outside, but on the inside as well, with both a naturally occurring labyrinthine cave system, and  absolutely stunning interiors:

They dedicated the structure to Nerdy Show- Thanks guys!

I’ve been told that there are countless other hidden dungeons, secret projects, and mysterious monuments made or in the works.  Among these rumored places are a series of buildings erected for each Lantern Corps, and a floating city. This is just a scatter-shot of some of the awesomeness afoot on our server.  If we missed you, no worries!  This won’t be the last travelogue of Nerdy Show Minecraft awesomeness.  At this point the world has become HUGE! There’s so much to see and do, we couldn’t possibly hit it all at once. Just check out these Cartographer maps:

Use some good old fashioned html to insert your Minecraft snap shots in the comments below.  We love seeing and hearing about what you’ve been up to.