Posted by NerdyShow on September 2, 2010 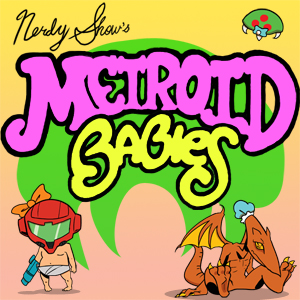 With Metroid: Other M just having come out for the Wii, now seems like the best time for Nerdy Show to devote a whole episode to one of the greatest game series’ of all-time, Metroid, and it’s bounty hunting protagonist – Samus Aran!  But something’s gone awry for the strong, silent, space pirate-slayer… the same thing that plagues every woman as they near the big 3-0… she’s gone baby crazy…  METROID BABY CRAZY!  Our review of Other M elaborates, as do the Nerdy Show gents.  You know their strange little minds tend to wander.

Not only does this episode weigh the pros and cons of this new game-changing installment to the legendary series, but it explores Metroid’s past.  The gang share stories of their first time on the planet Zebes and delve into the series chronology and its real-world origins – the games’ influences and the men who created it.  The episode also features a playlist of stupendous Metroid-influenced music and an interview with Metroid Metal – the band that screw attacks nerd music like no other. All that plus some suped-up sci-tech that’ll hit ya – pow!  Right in the baby-maker!

Though this is the last episode of Season 3, we won’t be gone –  no, no, no, no.  Listen to this episode for some hints to what we have in store and some cool things we’re going to be bringing to you in the interim.  Nerdy Show.com will still be quite “bumpin”, as the kids say, so be sure to check back with us often to see what we’ve cooked up, and keep an eye out for announcements for what awesome may come!