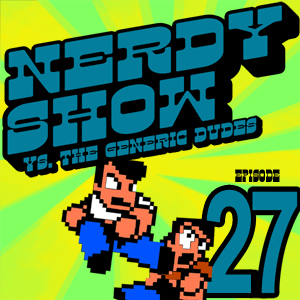 Brian Lee O’Malley‘s series of Scott Pilgrim graphic novels are awesome.  They take video game culture and smoosh it inside comic books!  In Scott’s world, the nonsense logic of video games are part of reality – you beat up hipsters and generic dudes and they turn into coins – THAT ROCKS! Now that Scott Pilgrim is a movie written and directed by Edgar “Shaun of the Dead” Wright all that geeky goodness is exploding IRL in a nerdgasm the likes of which has never hit the big screen before.  In this episode the gang is joined by nerd comedy musician, Insane Ian, to talk about the coolness of Scott Pilgrim Vs. The World, the differences between the books and the film, and the super-stars behind the soundtrack and score.

PLUS we dialed up Pete of Anamanaguchi, the chiptunes rock band that are providing the score for Scott Pilgrim Vs. The World: The Game.  Together we fight mediocre cellphone reception, dodge the cops, and find out how they scored this sweet gig.  We also talk to Reid, Ryan, and Charlie from Starmen.net and Fangamer, about the currently running Mother 3 Fanfest, their upcoming release of chiptunes documentary, Reformat the Planet on DVD as well as chiptunes-inspired merch, and the origins of their prolific fan communities.  There’s lots of old school video game conversation including some truth-bombs about River City Ransom, one of the games that most influenced Scott Pilgrim‘s world.  So strap on your power glove… and then take it off ’cause it’s useless- But play some cool games and listen to this episode.  It goes a little something like this: