Episode 22 :: Were The Wild Things Are 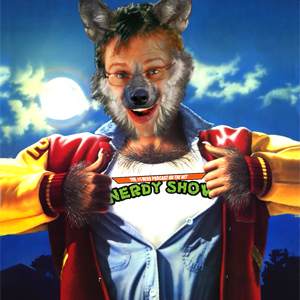 Zombies are on their way out, vampires are all the rage again, but there’s a new up-and-comer in the pop culture paranormal circuit… werewolves.  Sure, werewolves have been around a long time but they’ve never seen a surge in popularity like this before.  It seems like there’s an outbreak of lycanthropy in the western world and it’s hitting hard – with would-be teen wolves running amok in North American schools and shopping malls, even Nerdy Show has lost one of its number to the lupine side.

In this episode we rail on the nonsense of the Twilight series, look into real life teen wolves and explore their tragic wolven anguish on the internet and their hatred for the “hunters”.  Our werewolf discussion heats up when we place a call to Lunario Von Darkwolfe III, who claims to have been a werewolf for over seventy years and then get him on the phone with our duck huntin’ pal, Dean Wallace who may have bagged him a wolf-man or two in the past.

There’s plenty of comics, video games, and science mixed in with all this wolfy nonsense – but that’s not all.  What’s the craze that never waxes and wanes but is as immortal as the sea and sky?  NINJAS of course!  Masurao and Shinobi of Krondor Krew join us in the studio for some hardcore ninja-talk, armed to the teeth and sporting some sacred silver blades just in case they should be attacked by a were-creature.