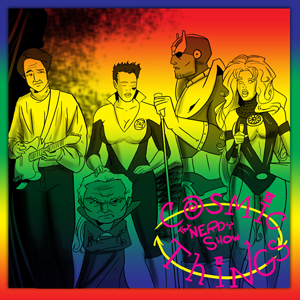 Come with us, dear listeners – BEYOND! Into the ballroom of the skies, where the infinite COSMOS are rife with unfathomable mysteries! Where space men and women wear sexy outfits and shoot BEAMS! Pew-pew-pew! Whoosh!

Nerdy Show adventures into the realms of our favorite cosmic comic books and some cosmic other stuff too! Captaining our journey to the stars and beyond are a few experts of the realm: Tony Bedard (Green Lantern Corps, R.E.B.L.E.S.), the Marvel cosmic writing duo Dan Abnett and Andy Lanning (Nova, Guardians of the Galaxy, Thanos Imperative), and our own junior cosmic cadet, Brian, whose re-telling of the Infinity Gauntlet is on the way. Each of them bequeath unto us their knowledge of the unknown and cosmic comic secrets of the past and future. It’s good stuff!

We’ve also chat with intergalactic rock stars, Kirby Krackle. The ONLY comic book rock band. You’ve no doubt had your mind blown by their music on our show in the past, now savor their sultry voices, heed their mighty words, and be prepared for them to unleash an Annihilation Wave of awesome on Nerdapalooza.

We also delve into the video game side of the cosmic sphere with a look at the recently released EVE Online expansion, Tyrannis and their currently running Alliance Tournament VIII – accompanied by spaced-out space mining stories from Nerdy Show correspondent, Kristin Frenzel. Also Cap’s verdict on Mario Galaxy 2. Ka-kow!

PLUS- There’s a big Dungeons and Doritos Announcement as the series makes its triumphant return. Brace yourself for all new madness, mayhem, and adventure!

Don’t forget to VOTE for us in the Best of Orlando competition and be sure to embiggen this week’s cover art drawn by Nerdy Strip artist, Tony Baldini, featuring a some of your favorite cosmic characters and the Master of the Cosmos himself, Carl Sagan.