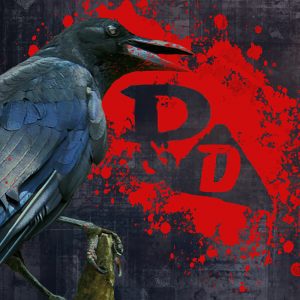 The triumphant return of DUNGEONS & DORITOS! Journey once more with CHAIR, Vimak, Jamalla and Jen’Ifer on their questionable travels for riches, renown and… other stuff.  After their confrontation with the Maze of Mischief, the band of miscreants finds that their favorite Tiefling has gone off, leaving only a letter.  So they plot their quest in the direction of Jen’Ifer and leave the town of Port O’Jon. This episode finds our mismatched trio wandering the countryside of Doritodonia.

This episode marks the dawn of a new era of DnD – with our new Game Master, Ruel and a new mode of play – Sagas RPG. It’s a fast, fun, and flexible form of table top perfect for our style of play and amazing for smoothly playing with chaos and creativity.  If you haven’t heard it yet, check out last episode of Nerdy Show, “Cosmic Things“where we interviewed Ruel and talk about what makes Sagas different and how we’re going to integrate it into Dungeons & Doritos.

Worried about following along?  Worry not!  You can pick up a digital copy of the Fantasy Sagas Player’s Guidebook here. So play along with us!

It’s important to note that this isn’t the first official game of us playing Sagas.  Before we made the commitment to dive into a whole new system and join up with a new GM we had to give ’em a test drive.  This was our test run of Sagas, based on loose renderings of our character sheets, not the final versions that are coming soon. We weren’t planning on releasing this recording as an episode, but we liked it so much we had to!  This is a harrowing adventure and these events are sure to come back to haunt the DnD crew.

Dungeons and Doritos is returning to its monthly schedule full-time, but to make up for your waiting you’ll be getting TWO episodes this month.  So be on the lookout for Episode 6 soon, the first episode where we play through with Sagas in its full glory.  With character sheets, bios, and more goodies when it launches.

Also, this is the first episode we’ve had since our poll on whether or not the series should feature music. The votes are in and you’ve voted to keep music but have fewer tracks and so thine wish is granted! This episode  has only three songs. Let us know your thoughts! The coming week we won’t be having an episode of Nerdy Show, but continued coverage from our E3 adventures and your second helping of Dungeons & Doritos… So chow down, guys!