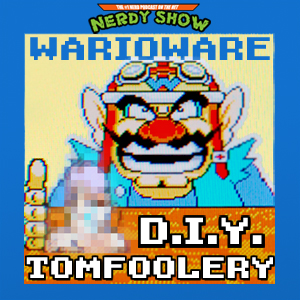 I hadn’t had a chance to really make a dent in the latest Warioware title, Warioware D.I.Y., by the time we recorded this week’s episode.  The game requires a certain amount of prep-time to get the garlic cloves rolling, but I’ve had a few days with it now and things have gotten… interesting.

The core concept of Warioware D.I.Y. is making your very own Warioware-styled microgames from the ground up – sprites, music – everything.  D.I.Y. is in many ways a spiritual successor, perhaps even kissing cousin, to the long-neglected (and nearly 20 year-old!), Mario Paint.  In addition to making microgames you can also create your own full-length songs and manipulate them DJ style, draw your own comics, and in case you’re feeling lazy there’s 90+ microgames on board.

Making your own microgames is a full-blown time consuming and creative process.  Nintend- …I mean Dr. Crygor’s game-making system is very simple and easy to understand, but the creativity it allows for means that it’s going to take time and planning to get your game up and running.  What’s more you have to trudge through a mandatory tutorial in order to gain the ability to make your own games.  Suffice it to say Nerdy Co.’s debut title, PK Pummel in which you chuck Mr. Saturns at Reggie Fils-Aime until he agrees to release Mother 3, is still in the works.  (UPDATE: now finished) BUT there are some quick-fix D.I.Y. tasks you can fulfill for Wario to whet your creative appetite.

As a part of the game’s introduction Wario asks you to draw him a scary monster for a Dragon Warrior parody.  It was the first thing the game asked me to do, so of course I drew a dick.  I mean, I knew that somewhere along the way in this make-your-own-mayhem party things were going to get vulgar, so why not just get it out of my system, right?  But then, the next game he asked me to make was whack-a-mole-styled.  Whack-a-mole, I mean, really!  How could I not draw penises?  I know around Nerdy Show you’ve come to expect things to get vulgar, so this should come as no surprise.  But, we’d like for our vulgar side (I like to think “creatively vulgar”) to just be a component of the show, rather than the dominant factor.  It’d be nice if our (semi)intelligent science discussions didn’t seem out of place in a sea of expletives and dick jokes, but as you know and as you’ll see I don’t always end up being the straight-laced, sensible one.  Let us go on a journey… to a land of NSFW microgames.

Mostly NSFW beyond this point  …mostly

Wario and I have been up to some serious tomfoolery.  Yeah, not every game has a dick in it, but I’m gonna level with you- most of ’em do.  On occasion I get my mind out of the gutter and come up with something clever and awesome, but much like Mad Libs Wario’s fill-in-the-blank microgame chores lend themselves well to explicit nonsense.  Sometimes I just can’t friggin’ help myself.

First up is the aforementioned Dragon Warrior parody and its sequel.  I like to call them Wiener Warrior and Wiener Warrior 2: Rage of the Triceracocks! 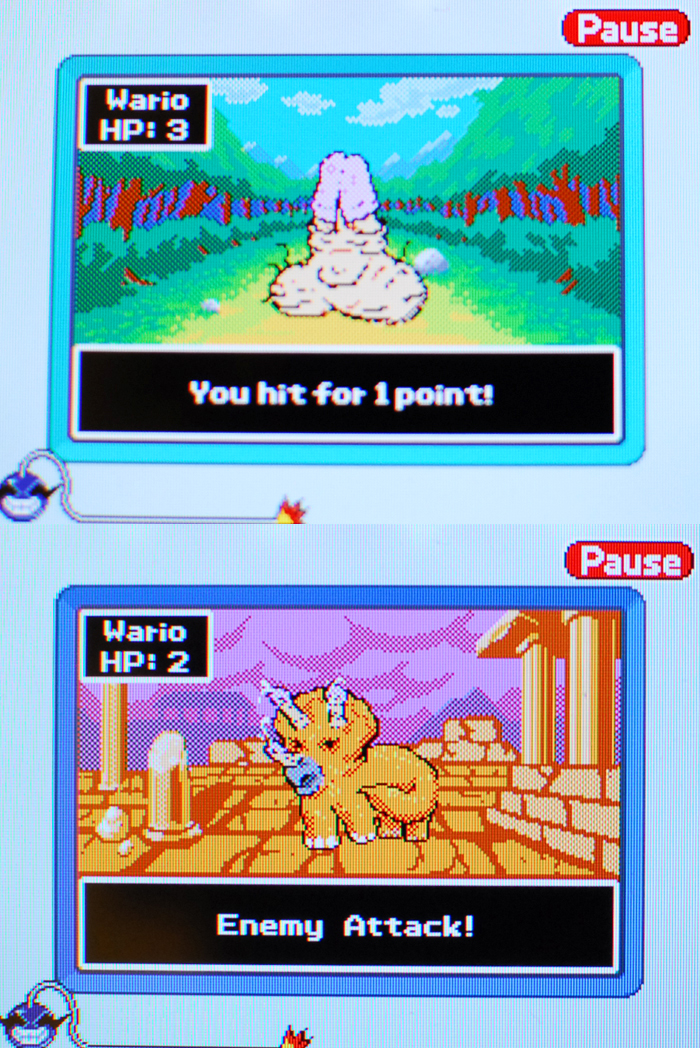 Pretty simple stuff.  Just tap the screen a few times and it’s over.  Therein lies one of the small problems with D.I.Y., the games are exclusively tap-based.  Unlike the previous DS cartridge Warioware title, Touched, the full range of the touch screen isn’t used.  You tap certain patterns, you tap certain areas, but you just tap.  No mics, no buttons, no sliding, no tracing – just tapping.  You also may have noticed the unusual coloring of the cocks I’ve drawn.  That’s because though the art software has a terrific amount of flexibility, it only renders graphics at a low-tier GBA level.  The flat color selection is as limited as Mario Paint. There’s no capacity to mix your own colors, choose opacity, or any of color-blending trickery that most basic art programs (even the latest MS Paint) have these days.  I’m fine with limited tools, it adds to the challenge, but I’m drawin’ a lot of sex organs here and there isn’t a proper pink at all!

Next up is Whack-n-Off, the dick pounding game.  Whose dicks are these coming out of the ground?  Is it , Monty Mole tormenting a farmer with his massive mole wood, or just Diglet dressed up for Halloween?  Either way Wario wants to beat down those stiffies with a mallet – bad news!

I knew that in order to preserve my personal integrity (sanity?  sexuality?) I had to break away from the dicks for a hot second, and for this game I made something just a bit adorable.  I came up with an idea for a game show recently called “Who Dat Cat?”  The premise is that there’s a panel of contestants and they’re shown a cat on screen.  They have to buzz in to try and name the pictured cat.  It could be eclectic choices like Danny John-Jules or Rum Tum Tugger, or maybe something more obvious like Garfield or our lord and savior, Ceiling Cat.  The microgame version of Who Dat Cat?, is a bit different.  It’s just a counting game and features the Nerdy Show in-house kitty crew Klarion and Teekl. 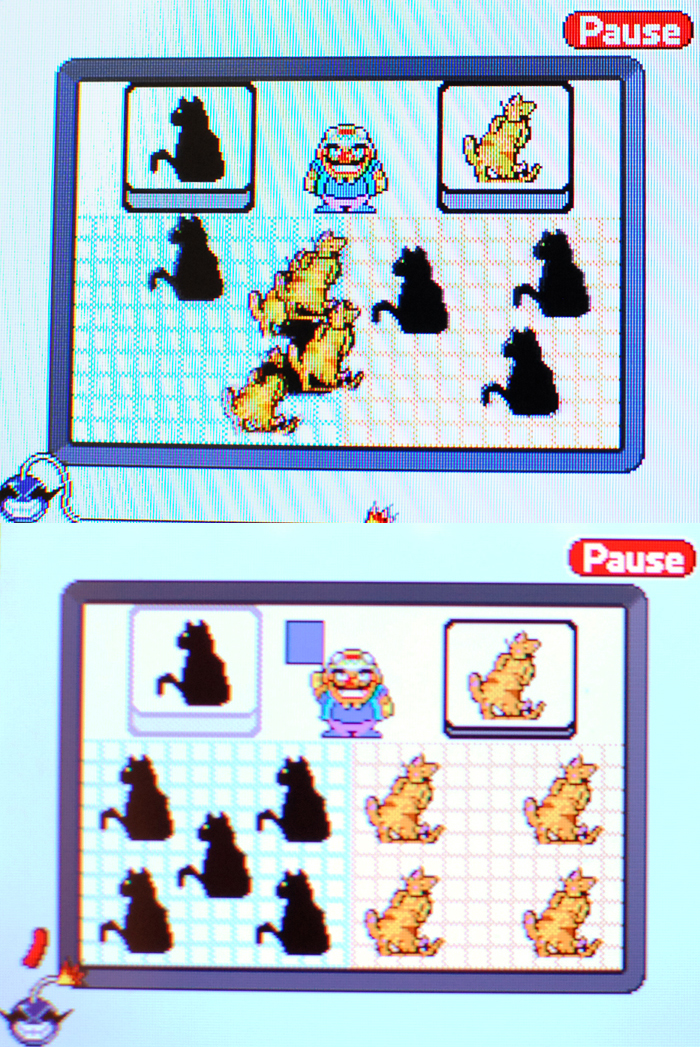 The next game is a redux of one of the more memorable original Warioware microgames, Crazy Car.  It’s really simple, something with wheels is coming at you, could be a car, could be a banana, but you’ve got to make Wario jump out of the way so he doesn’t get hit.  This version of the game only asked me to make one vehicle and I was back to my dick tricks again.  But why keep drawing the same ol’ dick?  There are different kinds of dicks in the world.  Ladies and gentlemen, Crazy Horse:

Wario asked me to make a face swapping game.  His eyes, nose and mouth would be mixed up with ones that I drew.  Somehow drawing accurate reproductions of Cage or Travolta seemed outside of my skill set, so I went with the next best thing: a horror show of mis-matched body parts.  Screaming mouths for eyes, a giant eye for a mouth, and a vagina for a nose.  After all, dicks aren’t the only sex organs in the world (they’re just the funniest). 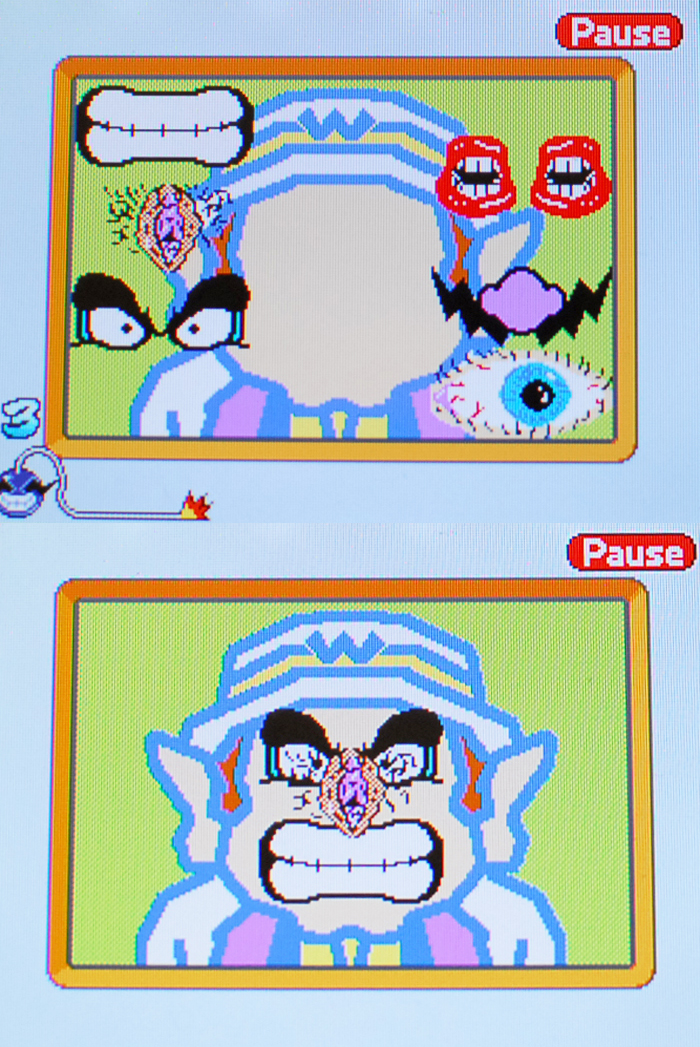 In this game you’re a rocketship version of Wario’s nose  and you have to launch booger rags at UFOs.  Those Lil’ UFOs looked too easy so I upped the stakes. 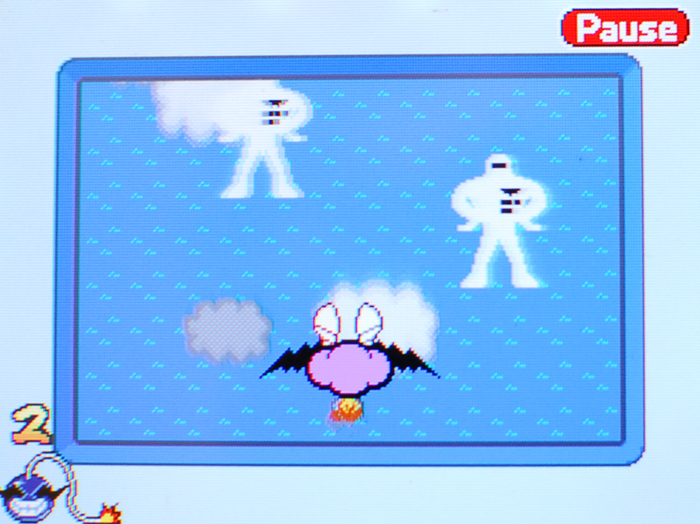 Ah, the old snap shot game.  This was fun because it game me two variables for the action graphics.  9-Volt’s Nintendo fanaticism was strong with me, so I made a Pokémon Snap microgame featuring the ever-beloved Bidoof and the thunder-thighed ghost, Gengar. 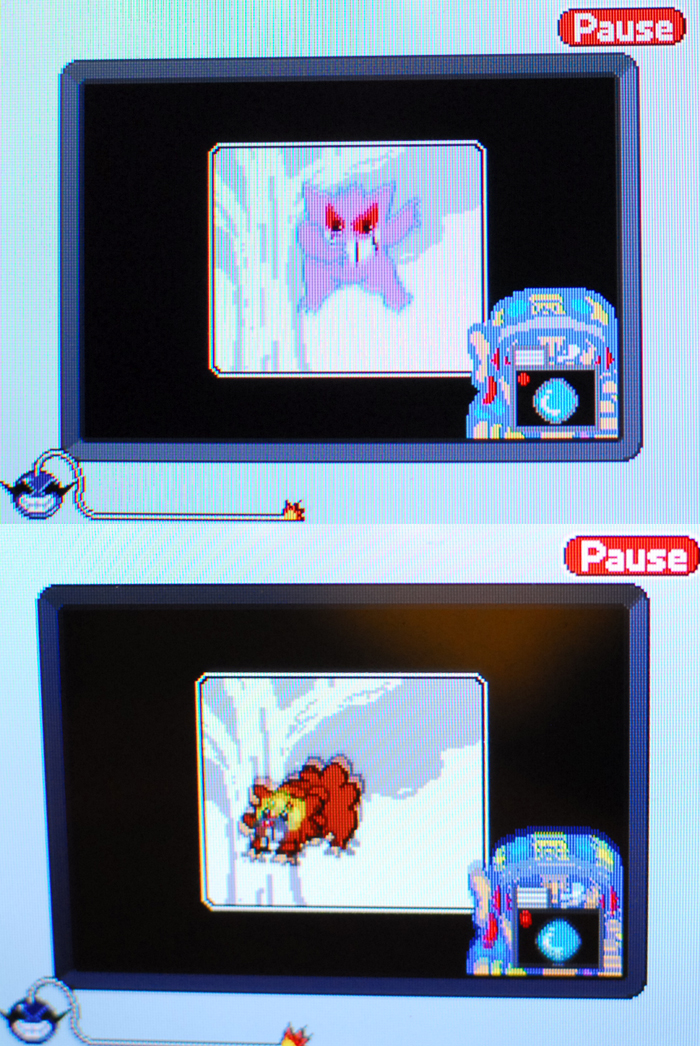 Three non-sexual games down, but nothing controversial.  Well, we’ll see about that.  Eggstraction is a perfect game for inserting weirdness: you smash an egg and something pops out of it.  My first thought was to draw a huddled up, nude Salvador Dalí, but that seemed too high-brow to be included in this collection of miscreant minigames.  It did get me thinking though…  So far, I’m most proud of this one.

Card matching games are always a good time.  Should I replicate items from the Mushroom Kingdom for that Mario feel?  Nah, how ’bout the only collectible card game that’s worth a damn, Magic The Gathering:

In retrospect I wish I’d replicated another notable card instead of doing the back of a Magic card, like “Fireball” or something, but whatev’.  Next up is a game formerly called Farm Fresh, now called Corpse Harvest.  Based on a true story.

My gut reaction when making these graphics is to ask myself “how can I make this sexually explicit” and then ask, “how can I not“?  When I first pondered this ice fishing game my immediate notion was to make a dickfish like the one that pursued those lovable Stella boys Michael, Michael, and David and their skit of the same name.  But I held back.  I classed it up and took the Discovery Channel approach.  Did you know that dolphin’s have prehensile dicks, kids?  Well, now you do.

I’ve still got three more games to help Wario make before he lets me leave his basement.  (see below) This is the last one I’ve done so far and it was a real no-brainer.  It’s another distinctive game from the first Warioware – catching a sliding beer mug.  I could have left well enough alone and done something clever here, I could have.  Just click the image below and you’ll know it was worth it. 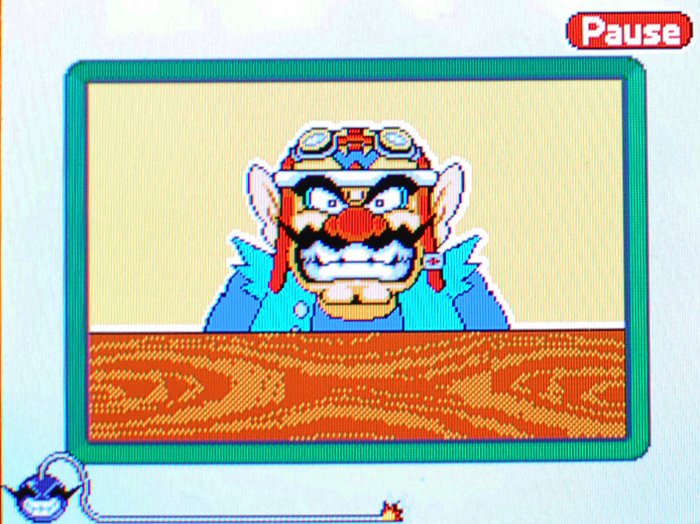 So on the whole how is Warioware D.I.Y.?  That’s a two-part answer. If you’re just here for the microgames it’s lackluster.  There are fewer games than normal and the tap-only controls make for a less-exciting game experience.  BUT the beauty of these simple games is that they were all made under the same limitations you yourself have.  In fact you can view the backdoor of these games and see how they’re all put together.  You can even borrow graphics and music from them.  The games have their entertainment value, but their real purpose is as examples for you to learn from for your own creations.  Of course one could argue “great, I get to make games, but I only get to make shitty tapping games”.  While this is true, there is a lot of room for clever programming and design work.  The creativity of the game is the real star, not necessarily the gameplay.  (And worse comes to worse you can always throw some dicks into the mix right?)

What’s really great about Warioware D.I.Y. is that your games aren’t trapped on your cartridge.  Gone are the days of building a sweet RPG on your PlayStation only to have it stuck on a memory card.  You can send your microgames, music, and comics to your friends DSes and even to the Wii.  With the WiiWare game, Warioware D.I.Y. Showcase you can download your microgames and play them on the big screen, plus it comes with 72 additional in-house microgames featuring the characters that were M.I.A. on the DS game.  Both D.I.Y. proper and the WiiWare title have access to the NinSoft store, where you can download additional microgames for free every week, including some made by big name game designers.  What’s more, there’s also themed competitions that give you the chance to have your game highlighted in the NinSoft Store.  Pretty damn cool.

We’d love to see what microgames you guys are making.  Comment, discuss, and post your microgames here, guys – so that all Nerdy Show types may share non-communicable mischief and mayhem amongst each other.  Now go… play.

Also, for your chortling pleasure, here’s the last three microgames Wario had me do graphics for:

In this game you undress Wario, but his sprite looked kinda like everybody’s favorite elf, Tingle.  So I gave him the appropriate attire.  it’s not form-fitting enough though, he looks kinda hip-hop what with the clock and everything, but check out the bulge on that guy.

This thing wasn’t really a game.  They just asked me to write a secret down.  This isn’t much of a secret, but I couldn’t think of a more appropriate end to this mayhem.