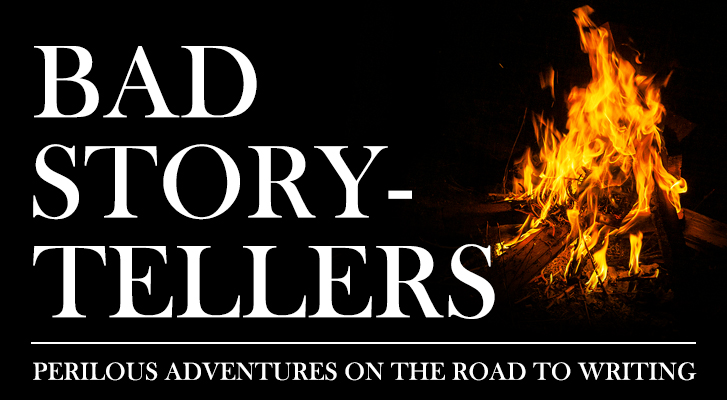 Bad Storytellers is a podcast about writing and things that are written.

Follow Josh, Doug, Maxx, and Liam, four friends on the road to becoming professional writers, as they embark on the perilous and often hilarious adventures of reading each others’ work for jollies and cynical critique (posted so you can read along too). All the media they consume is subject to dissemination – both the good and the bad – and every episode they workshop a movie idea and record a full trailer for it.

Come. Join us by the fire.

Jack-of-all-trades, master of some. After creating lots of work to satisfy others, he is currently focusing on improving his skill as a writer so that he can complete something that satisfies himself. His literary interests span from hard sci-fi to high fantasy. Outside of literature, he is a martial artist, a powerlifter, and a new dad trying his best.

A screenwriter and podcaster who pays the bills by doing office work and teaching. He loves science fiction, comedy, and action/adventure. When video games aren’t distracting him, he’s usually working on a RPG podcast for NerdyShow.com, or writing his next screenplay. Some people call themselves “script doctors.” Doug’s goal is to be a “script Batman.”

A teacher and historian. He enjoys writing, reading, and making up band premises that will never happen. Maxx can often be found participating in historical recreation, wood/metal working, and predicting celebrity deaths. Maxx has been credited with such feats as flying across the Atlantic in six hours, digging the Shasta Mystery Pit, and writing poetry not about hurt feelings. His eventual goal is to live in Pittsburgh and raise goats.

Retail manager of a small record store. He is an active member in the local music scene, enjoys video games, and has strong opinions on things. Most of these things don’t matter. Often he can be found skulking around town looking for fresh victims or drinking himself into an early grave. That grave will be marked by a seven foot tall black statue depicting a large baby crushing a garbage truck. Even he does not know why.