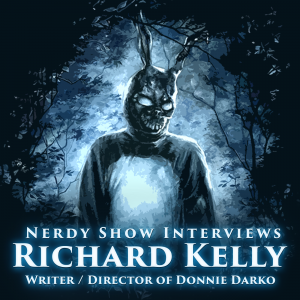 Donnie Darko is one of the greatest cult films of all time and a defining moment in 21st century cinema. It’s a love letter to outcasts, anyone who grew up in the 1980s, and fans of the finest thought-provoking horror and sci-fi. For its 15th anniversary, the film is getting re-released on the big screen in a new 4K edition, and we’re thrilled to commemorate the occasion by speaking with writer/ director Richard Kelly.

Join Cap and Consequence of Sound Editor-in-Chief, Michael Roffman as they look back on the cultural impact of the film and time travel to Kelly’s past; making cheese plates for Madonna and filming unapproved musical sequences. We gain metaphysical insights into the mysterious links between Donnie Darko and Kelly’s other films (Southland Tales and The Box), get hints a projects still to come, and discuss the music that defined the era. Plus Cap and Mike delve deep into the nature of nostalgia, their action figure collecting pasts, and much more.