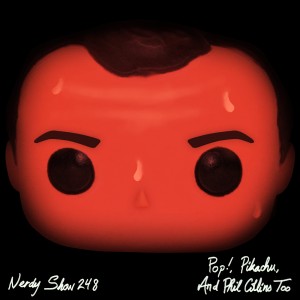 Take a look at us now… Did you feel us coming in the air? We’re back in the stu-stu-studio to talk about video games, movies, sci-tech, aaaand Cap interviewed Phil Collins. It wasn’t for Nerdy Show, but he did bring an excerpt to share with the class. Hear Phil Collins talk about that one time Phil was on Miami Vice and hear Cap maybe nerd out a bit too much…

But that’s just one item in a shopping spree of topics! Join Cap, boR, Nicky, and Brandon as we discuss Danny DeVito’s role in the future of Pokémon, Star Trek Beyond, Funko flipping, virtual sex apparatus, and more! Behold as we crack open the Kinder Egg of pop culture and succumb to the tempting choking hazards within.

Check Out Our New T-Shirts!