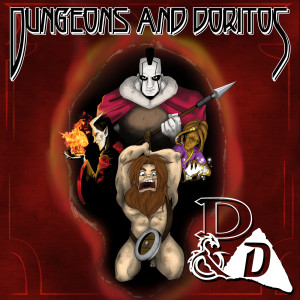 The debut adventure of Nerdy Show’s epic RPG podcast, Dungeons & Doritos, is back and better than ever!

Journey to the magical land of Doritodonia, and embark on a mayhem-filled, morally-questionable quest for wealth, honor, and crunchy corn chips! Dungeons & Doritos started as a one-shot episode of Nerdy Show where hosts Cat, Brian, Hex, and Triforce Mike were joined by ninja rapper DM Masurao of Krondor Krew to play 4th Edition Dungeons & Dragons. The episode was so popular it became its own series and the legend begins here!

Enter Jen’Ifer the egomaniacal tiefling warlock, Chair – a dining room chair transformed into a naked and crazed dwarf, Vimak the fish-out-of-water goliath shaman, and Jamela the overly sensual dragonborn. In this first quest, these four mismatched warriors venture into a kobold-infested keep to save dwarven miners from a White Dragon Wyrmling. But will their reward of Doritos be worth the torment of each other’s company?

Dungeons & Dragons will never be the same again.

Read the Comic Book Prequel to This Adventure: